The iPhone Gets Tough with iTough Fact Generator by Omegasoft

iTough Fact Generator (http://bit.ly/9EiGvF) places in your hand over 500 of the toughest tough guy facts imaginable, delivered with face-melting graphics and all the extra features you can handle. Available for the iPhone, iPad, and iPod Touch. 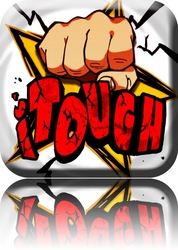 Are You Tough Enough?

Over 500 of the absolute best tough guy facts drenched with amazing graphics, customizable options, and social networking features. Save your favorites and blast your friends with facts via email, Twitter, or Facebook, all without leaving the app

With the release of the iTough Fact Generator, Omegasoft brings the legendary "Tough Guy Facts" internet meme (often associated with celebrity and TV tough guys such as Chuck Norris, Jack Bauer, Mr.T, and Vin Diesel) to the Apple iTunes store. iTough presents over 500 of the absolute best facts wrapped in amazing graphics and sound, packaged with a variety of customizable options and social networking features.

Omegasoft's aim in creating iTough Fact Generator is to finally do justice to the "Tough Guy Facts" meme, the pervasive and enduring nature of which has spawned a variety of lesser internet and mobile applications. In addition to showcasing stunning graphics and animation, iTough includes the ability to use any name in the facts, save your favorite facts for later viewing, and customize fact presentation. Users can also alter settings involving the iPhone's accelerometer and vibration capabilities for convenience.

In addition to iTough's superior presentation and features, it only makes sense that an application based on a social phenomena should itself include social networking features. In this iTough Fact Generator certainly does not disappoint; all it takes is a few taps to send facts directly to friends via Twitter, Facebook, or email, all without exiting the app. To further increase social engagement, users are also able to submit their own facts to Omegasoft for potential use in future updates.

Following the release of iTough Fact Generator on the iPhone, Omegasoft plans to create a version optimized for the iPad, as well as explore the possibility of bringing iTough to other platforms such as the Google Android. Fans are encouraged to connect with Omegasoft via their website, Twitter, Facebook, blog, or email to suggest potential platforms and feature updates, as well as score promo codes for free apps.