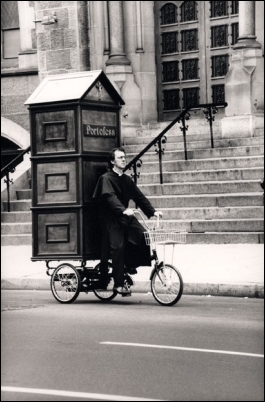 Artist and satirist Joey Skaggs is proud to announce the debut of his new blog Pranks.com on April Fools Day, April 1, 2007. Here visitors will find insights, news and discussions on everything to do with pranks, hoaxes, culture jamming and reality hacking around the world - past, present and future - mainstream and counter culture.

With Skaggs as editor, the site will have submissions from many known and not so known pranksters, artists, performers, activists and writers. Pranks.com, launching April Fools Day, will provide a continuing and growing exploration into the art of the prank; the role of the prankster as artist, activist and social observer; and the contribution of the prank to society.

Pranks have traditionally been relegated to the realm of the juvenile bad-boy or special occasions, like April Fools Day. People typically think of the word prank as referring to funny, embarrassing, humiliating, non-redeeming acts of just plain silliness or revenge. And while this may represent the majority of pranks in the world, the role of the prankster throughout history has been quite significant and influential. Mythic archetypes such as the trickster and coyote; the jester in the royal court; and pranksters throughout literature will all be explored.

In addition, topics such as pranks in the news, the sociology and psychology of pranks; political pranks; First Amendment issues; hoax etiquette; publicity stunts; urban legends; illusion and magic; fraud and deception; hype; spin; and propaganda will all be fodder for thought. As will, of course, all sorts of practical jokes and mischief...

Pranks offer an alternative palette for criticism and dissent, as well as a looking-glass into the human gullibility that results when critical analysis is suspended for wishful thinking. "I challenge personal belief systems that sustain status-quo thinking and that support close-mindedness, bias and prejudice, says Skaggs." Key motives running throughout his personal work are to inspire people to question authority in all of its guises and to ultimately think for themselves.

With this new endeavor, launching April Fools Day, Skaggs hopes to reach a broad audience of people interested in the intersection of reality and illusion. Those interested in contributing content will be invited to do so once the blog launches.

Pranks.com will shed light on all aspects of the topic, examining the intent, content, technique, and the magic that makes a prank live. It will even include tutorials and how-to instructions. Although the site will not encourage or condone irresponsible, misguided, unlawful or unethical practices, some meaningful pranks rightfully test the limits and cross the boundaries of lawfulness. To trivialize, ignore or dismiss them for this reason would be a disservice to everyone.

About Joey Skaggs: Joey Skaggs has been a doctor, a lawyer, and an Indian chief. Hailed as an entrepreneur extraordinaire, he created a bordello for dogs, was the proprietor of a celebrity sperm bank, and founded an organization to wipe out fat. He has saved the world with his cockroach vitamin elixir and was the first and only person to ever windsurf from Hawaii to California. As a pedaling priest with a confessional booth mounted on the back of a tricycle, he took confessions from politicians at the Democratic National Convention. As a real estate developer, he created the Final Curtain cemetery theme park mall and time share program for the dead. And as a computer scientist, he revolutionized the American Judicial System using a series of super computers that meted out equal justice to all.

Although these and other illustrious activities have been presented as truth in the annals of the international news media, in reality they have all been hoaxes, products of his imagination. For over 40 years Skaggs has been an artist and a satirist with a serious message. He has used the media as his canvas, creating performances to bring to light many of the difficult and complex socio-political issues of our day.

A life-long educator and performance art practioner, Skaggs has taught at the School of Visual Arts and Parsons/New School and he lectures and does presentations at schools, festivals and conferences around the world. His commentaries on media literacy and creative independent thinking are hilarious and thought provoking and have reached millions of people on a global scale. He has been hailed as The World's Greatest Hoaxer.

To add to his bag of tricks, he recently designed and manufactured the Universal Bulls**t Detector Watch (a real product) to enable people to humorously call it as they see it. Available online at http://www.bswatch.com, it flashes, moos and poops. It also tells time.

And, if that's not enough, New Yorkers are encouraged to attend prankster and performance artist Joey Skaggs' 22nd Annual April Fools Day Parade. The press release is available in the News Flash section of http://joeyskaggs.com.

About Pranks.com: The pranks.com Web site is designed by David Bunde of DGB Design using Wordpress software, and hosted, by Laughing Squid.

Father Joseph (aka Joey Skaggs) peddles Portofess, his portable confessional boothThe church must go where the sinners are. Religion on the move for people on the go!