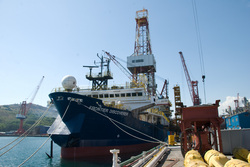 The only thing you can do is wait six months for the ice to melt and by then [the oil] will have spread far and wide.

Two engineers with extensive experience in the oil industry said on Capitol Hill today that Shell Oil’s plans to begin drilling off the coast of Alaska in less than six weeks are fraught with risks that have not been adequately addressed by the company.

Dr. Robert Bea, a former Shell official, and Susan Harvey, who previously worked for British Petroleum, expressed serious concerns about Shell’s drilling plans, noting that a spill in the Arctic could not be cleaned up. Those same concerns were detailed in a twelve-page letter that World Wildlife Fund submitted today to Interior Secretary Ken Salazar, analyzing Shell’s proposed safety procedures for drilling in the Beaufort and Chukchi seas.

Dr. Bea, who now heads the Center for Catastrophic Risk Management at the University of California-Berkley, said he still considers Shell to be like “family,” but nevertheless is concerned that the company’s proposal does not provide an accurate assessment of the true risks of drilling in the Arctic. “This is imagineering, not engineering,” Bea said.

Shell plans to begin drilling in the Beaufort Sea as soon as July 1 and expand drilling operations to the Chukchi Sea soon thereafter. The company’s drilling vessel, the Frontier Discoverer, is expected to depart Subic Bay, in the Philippines, for the coast of Alaska within days. Nearly 700 leases have been sold in the Beaufort and Chukchi, setting the stage for what WWF officials have called an “Arctic oil rush.” Photos taken last week of the Frontier Discoverer in Subic Bay are available here.

Harvey, who once headed the state agency in Alaska that oversees oil spill prevention and response, noted that the Alaskan North Slope is a particularly risky area to drill given its remoteness and lack of basic infrastructure needed to deploy oil spill response equipment. “All of that spill response infrastructure you see in the gulf right now, it doesn’t exist in Alaska,” she said.

Harvey explained that the freezing temperatures and icy waters of the Arctic render traditional response procedures inadequate and said oil trapped under ice would be unrecoverable for up to half a year. In that situation, she said, “The only thing you can do is wait six months for the ice to melt and by then [the oil] will have spread far and wide.”

The only practical response procedure in the Arctic environment, Harvey said, would be burning off the oil, but she noted severe limitations in using that technique. She agreed with oil industry claims that it is technically possible to burn up to 90 percent of oil that is in a contained space, but said it would be nearly impossible to contain more than just a small fraction of the oil, given the limited number of vessels that would be able to help with containment and the vast size of the potential spill area. “It’s like trying to mow a 100 acre lawn with one lawnmower,” she said.

Bea and Harvey made their remarks at a Capitol Hill briefing that was co-hosted by WWF and moderated by WWF President and CEO Carter Roberts.

As the BP oil spill crisis in the Gulf of Mexico continues to worsen, WWF has called upon President Obama and Secretary Salazar to halt Shell’s planned drilling until the Deepwater Horizon disaster has been fully investigated and the technology and procedures have been put in place to respond to and clean up a spill in the harsh, remote waters of the American Arctic.

“We still don’t have a full picture of what went wrong in the gulf and we need to make sure we don’t sow the seeds of disaster in this very, very special place,” said WWF President and CEO Carter Roberts, referring to the Beaufort and Chukchi seas.

In the May 20, 2010 letter to Secretary Salazar, WWF addressed Shell’s proposal, point-by-point, illustrating how the technology and procedures have not yet been developed to adequately respond to a spill in Arctic waters. WWF’s analysis noted that drilling in the harsh, remote environment of the Arctic is far more perilous than in the Gulf of Mexico and that the technology and logistical infrastructure does not exist to contain and clean up a spill in the Arctic waters of the Beaufort and Chukchi seas.

For the native Alaskan communities along the North Slope, an oil spill could be devastating to their culture and way of life, which is entirely dependent on the sea for subsistence hunting and fishing. Several Native Alaskan leaders visited the gulf coast earlier this week to observe the unfolding disaster first-hand. They are now in Washington, D.C., urging federal leaders to prevent a similar catastrophe in their back yards by halting Shell’s proposed drilling.

“What we saw [in the gulf] was very sad,” said Martha Ipalook-Falk, Tribal Council Treasurer of the Inupiat Community of the Arctic Slope, who participated in the Capitol Hill briefing today. “These memories of black plumes will stay with us – especially imagining the contrast to the white of the Arctic that we see around us in our homes.”