At SOFA New York, browngrotta arts will exhibit Wendy Wahl’s work, which encourages viewers to think critically about the sources of information in the 21st century 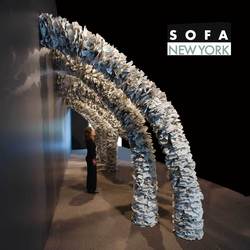 Wahl finds different ways to reconfigure the pages of the Encyclopedia Britannica; the leaves may be stacked into forms that suggest an alternative forest of knowledge or tightly scrolled and packed within a frame, making for a composition that suggests a cabinet of hidden knowledge, those archives of information that are at once visible and concealed, at hand and remote.

From Thursday April 15th to Monday April 19th, 2010, Rhode Island-based artist Wendy Wahl will exhibit branches, an installation constructed from discarded and deconstructed Encyclopedia Britannicas inside the Park Avenue Armory in New York for the Sculpture, Objects and Functional Art (SOFA) exposition. Inside the Armory, branches will flank SOFA's entrance and stand approximately nine-feet high, six-feet deep, and eleven-feet wide.  Viewers will be encouraged to move through the sculpture, whose form and materials will serve as a contemporary reflection on the ancient idea of the Tree of Knowledge.

“We are thrilled to have Wahl frame this year’s edition of SOFA New York with her provocative work that will doubtlessly energize veterans and newcomers alike,” added Mark Lyman, President, The Art Fair Company and Founder/Director of SOFA.

“I love the materiality of books,” explains Wahl, “and branches is a tribute of sorts to a medium in transition.  It’s a wonderful opportunity to continue my exploration at SOFA in New York City—the center of the rapidly changing publishing industry.  I want the fair’s audience to think about how they get their knowledge and to question their relationships to the natural world.  What are the connections between nature and language? How does the existence of a multitude of new ways to communicate alter our understanding of meaning and significance?”

The installation continues a series that Wahl began in 2005, which addresses a set of ideas including accessibility and accumulation, synthesis and sustainability. Previous installations in the series have appeared at the Newport Art Museum and the Bristol Art Museum in Rhode Island and the Fuller Craft Museum of Art in Brockton, Massachusetts.

"Digital media has led such artists as Wendy Wahl to re-evaluate the potency of the printed word," Akiko Busch wrote last fall in an essay in the catalog The 10th Wave III, "Wahl finds different ways to reconfigure the pages of the Encyclopedia Britannica; the leaves may be stacked into forms that suggest an alternative forest of knowledge or tightly scrolled and packed within a frame, making for a composition that suggests a cabinet of hidden knowledge, those archives of information that are at once visible and concealed, at hand and remote."

Wahl's work is represented by browngrotta arts of Wilton, Connecticut. The gallery will feature art by Wendy Wahl and more than 25 other artists in its SOFA New York 2010 installation in booth 204. Wahl’s work can also be found in the permanent collection of the Cooper-Hewitt National Design Museum (New York, NY) and the American Embassy in Tashkent, Uzbekistan (through the Art in Embassies Program).  She has exhibited throughout the world at venues such as the Contemporary Jewish Museum (San Francisco, CA), the Newport Art Museum (Newport, RI), the University of Wollongong (Australia), and the International Textile Convention (Kyoto, Japan).

About browngrotta arts
For more than 20 years, browngrotta arts has promoted contemporary art textiles and fiber sculpture. The gallery represents the work seminal artists in the field like Françoise Grossen, Ritzi Jacobi, Helena Hernmarck and the late Ed Rossbach and renowned artists from abroad including Ulla Maija-Vikman of Finland, Hiroyuki Shindo of Japan and Sue Lawty of the UK. The firm has published 37 art catalogs and placed art work in dozens of private, corporate and museum collections in the US and abroad.

About SOFA
Among the nation’s premier destinations for cutting-edge modern and contemporary design and decorative arts, SOFA has attracted a global audience of discerning collectors, critics, and enthusiasts since its inception over a decade ago. This year, more than 50 galleries from the United States, Canada, Belgium, Denmark, England, France, Turkey, Japan, and Brazil will come together in New York from April 15th to April 19th and push the boundaries of medium and genre.