According to Aaron Day, COO of the Atlas Society, "In 2012, the United States will either change course or move quickly toward a point of no return in the battle to preserve our generation’s remaining freedoms. The Atlas Society's involvement with the Atlas Shrugged movies and education of viewers about the ideas in the Atlas Shrugged Novel provides a huge opportunity to positively influence the fight for freedom." 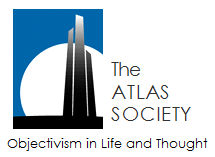 The Atlas Society board recognizes the urgency and has committed to ramp up the moral defense of 'life, liberty, and the pursuit of happiness,

"The world depicted in Atlas Shrugged has spilled into our streets with producers vs expropriators, Tea Party vs Occupy Wall Street, and a pervasive sense of confusion and helplessness. We are approaching the dead-end of egalitarianism, and Atlas Shrugged reminds us what we are witnessing - the reign of crony capitalism and unchecked political pull - the inevitable results of our choices. The Atlas Society board recognizes the urgency and has committed to ramp up the moral defense of 'life, liberty, and the pursuit of happiness'," said Jay Lapeyre, Chairman of The Atlas Society's Board of Trustees.

The Atlas Shrugged section of the TAS website showcases the quality of work produced by TAS in the defense of these important principles.

TAS CEO, David Kelley, has just published the latest in a series of Ayn Rand myths called Myth: Ayn Rand was an Elitist. Kelley dispels the myth that Rand was an elitist, "Rand envisioned a dynamic society where each person is free go as far as he can and is responsible for living the life that he chooses, on his own terms. It’s a vision of individualism, achievement, and freedom. It is not a vision of class supremacy nor of class equality, but of the harmony of interests among individuals. It isn’t for the privileged, but for the productive. It isn’t against the poor, but against the irrational, the slothful, the envious, and the power-seeking—whatever their origin or social status, " Kelley explains.

The proceeds from the capital campaign will be used to continue this caliber of work. "We have structured this campaign so that anyone who wants to actively support the ideas of Atlas Shrugged can make a difference by donating to The Atlas Society. Supporters can donate as little as $5 to the cause. There are also opportunities for interested parties to contribute their time in addition to financial resources," said Aaron Day, COO.

The Society is a tax-exempt, 501(c)(3) educational organization. U.S. contributions are deductible in accordance with the Internal Revenue Code. TAS will provide tax receipts for all contributions.

To learn more about the Atlas Shrugged Capital Campaign contact:

About The Atlas Society
Founded in 1991, The Atlas Society (TAS), a 501(c)(3) nonprofit organization headquartered in Washington DC, develops and promotes open Objectivism: the philosophy of reason, individualism, achievement and freedom. Objectivism was founded by Ayn Rand (1905-1982), the author of Atlas Shrugged, The Fountainhead, The Virtue of Selfishness, and other works. As the founders of open Objectivism, TAS believes that the philosophy is a body of knowledge open to expansion and revision, through rational inquiry and open discussion and debate. The organization's programs reach a broad audience ranging from the general public to graduate students in philosophy. Learn more about The Atlas Society and its distinguished and Board of Trustees at http://www.atlassociety.org.