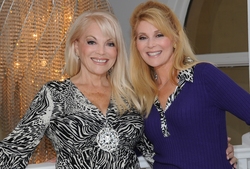 We want to create a wardrobe that flatters every shape and size. The collection transcends the generations -- it is ageless and timeless. Our designs are classic, extremely comfortable, easy-to-wash, and always include a touch of glamour.

A successful television and film actress, singer, writer, composer, and producer -- as well as mother of teenage twin boys -- Audrey Landers can now add fashion designer and style entrepreneur to her credits. Audrey and her mother and business partner Ruth Landers bring their passion for fashion and their decades of experience working with clothing designers, to the Landers STAR Collection (Landers Star Collection).

During Audrey’s 30 year career in front of the camera -- with Ruth as her manager -- the duo collaborated with the designers in Hollywood, New York, Paris and Milan who were styling Audrey. Over the years they learned the secrets to accentuating one’s assets - - and camouflaging when necessary. With that insight and experience, along with their deep love of all things fashion and style, the Landers STAR Collection of women’s clothing was born.

The collection premiered on Home Shopping Europe in 2008 with great success. Ruth and Audrey appeared on air (speaking several languages) and had a fruitful year abroad adding to Audrey’s already established European stardom through her recording career and “Dallas” fame. They decided to bring the Landers STAR Collection home to the U.S. consumer, where it is now available at shopnbc.com. She often makes appearances on ShopNBC TV to present the collection live. The next show with Audrey and Ruth is Thursday, January 14, 2010 at 1:00 AM, 8:00 AM and 12 Noon (EST).

Audrey explains, “We want to create a wardrobe that flatters every shape and size. The collection transcends the generations -- it is ageless and timeless. Our designs are classic, extremely comfortable, easy-to-wash, and always include a touch of glamour.”

Ruth adds, “We add details of crystals, beads, and sequins -- just enough to give you that sparkle, to lift your spirits, and make you feel like a star. We know that if you look good, you feel good … and when you feel good, you look good. Every woman deserves that.”

Still best known to fans for her role as Afton Cooper for eight years on Dallas, Audrey Landers grew up in front of the camera in the 1970s on daytime television (Secret Storm, Somerset). Hundreds of primetime guest roles in the 1980s and 1990s followed (Love Boat, Fantasy Island, Hotel, Murder She Wrote, etc.). She went on to star in the film A Chorus Line (1985) and on the daytime drama One Life to Live (1990). In 1995 with toddler boys at home, she wrote (47 episodes and 250 original songs) and performed in the children’s series, The Huggabug Club, produced by Ruth, which aired on public television for five years and continues to run on other stations today. In 2009 Audrey appeared in a recurring role on USA Network’s Burn Notice and in Fox Films Comedy remake, Bachelor Party.

While working in the U.S., she was breaking records in Europe as a singer and composer. She earned 10 gold singles, four gold albums and two platinum albums.