Coffee machine company says it will lead the way for "super-automatic" coffee machines that use artificial intelligence. This new breed of learning coffee makers could be introduced in the next several years, predicts coffee machine retailer. 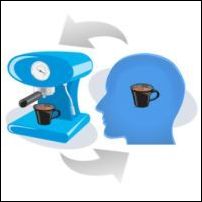 and you just give it a call when you are a few minutes from home, and it already knows what to brew. If you want to override preset drink preferences, you can dial in and enter an override drink code. Existing cellular technology opens up a slew of possibilities.

It sounds like something out of a sci fi novel: futuristic appliances that turn on and prepare favorite recipes based on their owner's thoughts. But for Lafayette, Indiana based JL Hufford Coffee and Tea, such a future is not all that distant. Today, the company announced that it has begun provisional patent exploration into coffee machines that learn and react to their users.

James Pappas, JL Hufford Coffee and Tea's Product Manager, believes that the technology enabling an appliance to learn and react to its user's preferences, so-called "ubiquitous computing", is already both available and affordable. "The software for a basic [artificial intelligence] learning algorithm is currently available and quite inexpensive", says Pappas, whose store specializes in "super-automatic" coffee machines.

Super-automatic coffee machines totally automate the coffee and espresso brewing process. A machine is filled with coffee beans and water, and the unit grinds, brews, disposes of used coffee grounds, and resets itself for the next cup. Within the past several years, so-called "One-Touch" machines have taken automated brewing a step further with their ability to brew milk-based coffee drinks, like lattes and cappuccinos, with the press of one button. In addition, the newest super-automatics, like the Jura-Capresso Impressa Z6, allow each member of the family to program his or her own drink preferences, like coffee temperature, strength, and size. "This is simply the next logical step", claims Pappas.

What will it be like to use such a machine? "For the first several weeks, the machine learns the drinking patterns of its users. Then it adapts. Every Sunday afternoon, it's French vanilla cappuccino time. Each weekday morning, it starts brewing a triple espresso at 7:00 am. After dinner, it does up a creamy decaf café au lait." How does it know where you are or at exactly which moment you'll be ready for your drink? Pappas is tight-lipped about this aspect, the crux of his invention, but he hints at GPS tracking or existing RFID technology. What is certain is that some machines, like the Jura-Capresso Impressa F9 already have ports which could be connected to a computer. Once the computer is networked, the possibilities are many.

What's more, Pappas envisions yet another feature for your cellular phone. "You have your coffee maker on speed dial," explains Pappas, "and you just give it a call when you are a few minutes from home, and it already knows what to brew. If you want to override preset drink preferences, you can dial in and enter an override drink code. Existing cellular technology opens up a slew of possibilities."

Although this is all still in the theoretical phase, existing super-automatic coffee centers already curtail performance based on their user's preferences. "We already carry machines that have personalized messages for their users, remember different user's preferences, and can be connected to the Internet." explains Pappas.

Such innovations are nothing new for JL Hufford Coffee and Tea, who would like a prototype of such a machine to be ready within the next several years. In 2005, the company introduced Superautomatika Blend ®, the first coffee beans that were crafted exclusively for use with super-automatic coffee centers.