Local teen band wins local competition to open for rock icon Alice Cooper at his annual Christmas Pudding Event at Comerica Theatre. The group is comprised of local kids ages 13 - 18 that attend the after school program Rock n Roll High School, which caters to kids ages 7 - 19 that are interested in performing in the music industry. 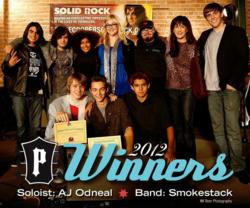 My son is typical of the kids who first join our Rock n Roll High School, they start out shy and a bit insecure but in a short time, our kids are able to perform in live venues like regular gigs at Tempe Marketplace, Hard Rock Café and Warren Jazz Bistro.

Rock and Roll High School group Smokestack was deemed the winner of Rock Legend Alice Cooper’s Christmas Pudding music competition. Smokestack was one of nearly 40 youth bands that participated in his annual music face off. Declared the winner after a two-day finals competition at Cooperstown, Smokestack will claim their prize on Dec. 8-- performing as the opening act for Cooper himself at his annual Christmas Pudding event to be held at the Comerica Theatre in Phoenix, Arizona. Tickets are still available for purchase.

Each year, Cooper likes to keep people guessing on exactly who will be showing up to perform at his music extravaganza but he hinted on his Solid Rock Foundation Facebook page that actor Johnny Depp will be making a guest appearance and performing with Cooper and his band along with Dan Felder and L.A. Guns. All proceeds from the event go to Cooper’s Solid Rock foundation, a non-profit organization he founded to help enrich the lives of teens through music, dance and self-expression.

Winning band Smokestack is one of several youth bands that perform on a regular basis through Rock n Roll High School based in Chandler, Arizona. Owner Steve Berg, whose son is the lead singer of Smokestack, shared that the band’s experience performing regularly in front of live audiences helped set them apart from their competitors. “During the finals, they had great showmanship,” Berg said. “All of them were confident and owned the stage, which made a big difference.”

“My son is typical of the kids who first join our Rock n Roll High School, which was launched about a year ago,” he continued. “They start out shy and a bit insecure but within a short time, our kids are able to perform in live venues like regular gigs at Tempe Marketplace, Hard Rock Café in Phoenix and Warren Jazz Bistro in Gilbert.” Berg is amazed at the level of maturation and development that occurs with each student at the school and like their parents, he is proud every time he sees his students perform in front of a live audience.

A former builder of homes for 30 years, Berg is hoping the word will spread about his new music school, which now has close to 70 enrollees. “This school started out as a simple idea to fill a void for kids to perform the music they love and have an opportunity to grow as performers,” he concluded. “Now I can see it is something much bigger than me and the impact it is having on these kids is quite rewarding.”

About Rock and Roll High School
Arizona-based Rock n Roll High School is a new approach to music for kids ages 7-19 using youth sports leagues as its model. Young aspiring musicians learn to perform in front of live audiences in their local community while parents and friends cheer them on. Students have an opportunity to meet new friends who share a passion for music in a safe and instructive environment all at an affordable monthly fee for parents.