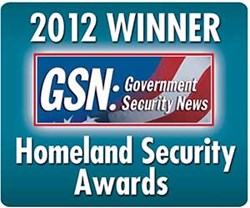 At a gala dinner that drew hundreds of government officials and industry executives to the Washington Convention Center on November 29, Government Security News announced the winners -- including Desktop Alert -- in 42 different categories in its 4th Annual Homeland Security Awards competition.

In the Best Regional or National Public Safety Communications Deployment category, GSN identified Desktop Alert as the category winner. All winners were honored at a festive banquet GSN hosted in a ballroom of the Washington, DC Convention Center.

One of the highlights at the dinner was the presentation of the GSN / Raytheon Award for Distinguished Leadership and Innovation in Public Safety and Security to Richard Reed, Deputy Assistant to the President for Homeland Security. Reed delivered an insightful keynote address to an audience of industry executives and government officials at the federal, state and local levels.

The winners were selected by a panel of objective judges, according to Jacob Goodwin, Editor-in-Chief of Government Security News. "We received an outstanding group of entries and have handed winners’ plaques to an exceptional group of companies and government agencies," said Goodwin.

"We are highly honored by the award and recognition. Our companies repeated accomplishments and increased rapid selection by the United States most premiere line of defense military and civilian organizations is entirely based on our notification platforms past performance reports and system life-cycle sustainability costs. Desktop Alert delivers a proven best-of-breed total mass notification solution that is highly affordable, compliant with Department of Defense requirements and now serving over two million end-users daily.", said Howard Ryan, Founder of Desktop Alert Inc.

Northern Command is tasked with providing military support for civil authorities in the U.S., and protecting the territory and national interests of the United States within the contiguous United States, Alaska, Canada, Mexico, as well as the air, land and sea approaches to these areas.

The National Guard of the United States is a reserve military force composed of National Guard militia members or units of each state and the territories of Guam and the Virgin Islands plus the Commonwealth of Puerto Rico and the District of Columbia (54 organizations) under federally recognized active or inactive armed force service for the United States.

The Air National Guard (ANG), often referred to as the Air Guard, is an air force militia and a reserve component of the United States Air Force. Air National Guard organizations are organized by each of the fifty U.S. states, the commonwealth of Puerto Rico, the territories of Guam and the U.S. Virgin Islands, and the District of Columbia of the United States. Each state, the District of Columbia and the commonwealth of Puerto Rico each have a minimum of one ANG flying unit with either assigned aircraft or aircraft shared with a unit of the active duty Air Force under an "Associate" arrangement. The ANG of the territories of Guam and the Virgin Islands have no aircraft assigned and perform ground support functions. Air National Guard activities may be located on active duty air force bases, air reserve bases, naval air stations/joint reserve bases, or air national guard bases and stations which are either independent military facilities or collocated as tenants on civilian-controlled joint civil-military airports.

The Federal Emergency Management Agency (FEMA) is an agency of the United States Department of Homeland Security, initially created by Presidential Reorganization Plan No. 3 of 1978 and implemented by two Executive Orders on April 1, 1979. The agency's primary purpose is to coordinate the response to a disaster that has occurred in the United States and that overwhelms the resources of local and state authorities. The governor of the state in which the disaster occurs must declare a state of emergency and formally request from the president that FEMA and the federal government respond to the disaster. FEMA also provides these services for territories of the United States, such as Puerto Rico. The only exception to the state's gubernatorial declaration requirement occurs when an emergency and/or disaster takes place on federal property or to a federal asset, for example, the 1995 bombing of the Alfred P. Murrah Federal Building in Oklahoma City, Oklahoma, or the Space Shuttle Columbia in the 2003 return-flight disaster.

While on-the-ground support of disaster recovery efforts is a major part of FEMA's charter, the agency provides state and local governments with experts in specialized fields and funding for rebuilding efforts and relief funds for infrastructure by directing individuals to access low interest loans, in conjunction with the Small Business Administration. In addition to this, FEMA provides funds for training of response personnel throughout the United States and its territories as part of the agency's preparedness effort.

Worldwide U.S. Military organizations such as U.S. Northern Command, The United States National Guard, The United States Air Force Academy, The United States Military Academy at West Point, Multi-National Forces in IRAQ, The U.S. Air Force, The U.S. Army now utilize the Desktop Alert mass notification platform daily for their organizations emergency communication requirements. Desktop Alert can contact thousands of users with desktop alerts and require receipt confirmation of the message. Those not verified can then be listed on a report and/or sent as a "Target Package" to be automatically contacted by other means such as email, SMS, phone calls and other devices.