Mold and Leaks on Roofs Expected to Cost Fillmore Middle School $400,000, My Cleaning Products Recommends a Product That Could Cut Mold Treatment Expenses by $1,000

The Fillmore Middle School in California is plagued by the toxic black mold and might spend $400,000 for treatment. Wanting to help decrease the mold treatment expenses, My Cleaning Products suggested to school officials and other mold sufferers the use of Molderizer and Safe Shield. 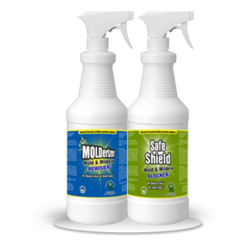 ...if paired with Safe Shield, it detailed that anybody could implement an effective, safe, easy and inexpensive mold removal and mold prevention processes.

A moldy and leaky gymnasium roof is plaguing the Fillmore Middle School in California. And as reported by vcstar.com, the mold treatment and repair that it would require could cost the school $400,000. Wanting to help decrease the expenses brought by black mold, My Cleaning Products suggested to the officials and all other mold sufferers the use of a non-invasive mold remediation spray.

According to the said report, the toxic mold has caused serious damage to the ceiling of the school's gymnasium and that it would need to be replaced. The leaks were so severe that buckets were used to catch the water when it rains, it shared. And worse, other classrooms were also found to have black mold in them.

The repair of the moldy ceiling, related the report, wouldn't be later this summer. However, it said that parents disagreed. They stated that the mold treatment and the renovation must be done as soon as possible given that black mold is a serious threat to everybody's health.

“Fillmore Middle School is not welcoming the wet weather forecast this week.

Despite being just 12 years old, the school’s gymnasium and classrooms are experiencing serious water damage from roofs that have been leaking for years. Parents are concerned about their children’s safety as more buckets are used to catch the leaks. District officials say the problem is so severe, the entire gymnasium roof must be replaced.”

So school officials could promptly address the black mold problem, My Cleaning Products said why not use Molderizer? It stated that the solution has been used by mold contractors for years. And as they proved, it detailed that it is an effective toxic mold removal spray that could decrease the mold remediation expenses by $1,000 and probably even more.

Additionally, the company related that Molderizer is also organic-based. Hence, the use of it is safe. And if paired with Safe Shield, it detailed that anybody could implement an effective, safe, easy and inexpensive mold removal and mold prevention processes.

To prove themselves that both Molderizer and Safe Shield are truly the best of mold sprays, My Cleaning Products also encouraged the public to grab a sample of them. It said that they are available at Molderizer.com.