The Art of Collaboration with Mona Kuhn 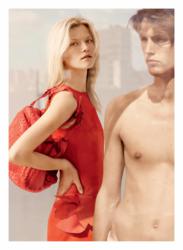 Bottega Veneta is pleased to announce that photographer Mona Kuhn has shot the brand’s Cruise 2011/2012 advertising campaign. The campaign, which features both the women’s and men’s ready-to-wear collections, was shot on location in May of 2011, on the roof of the New Museum in New York City. It is the latest in Bottega Veneta’s one-of-a-kind creative collaborations featuring the talents of outstanding artists.

The Cruise 2011/2012 collection is weightless, effortless, and urbane. The palette contrasts brilliant, saturated colors such as sunset, fire, shock and turquoise, with muted, refined neutrals including plaster, silt, dakar, and espresso. A breezy, sun-drenched sensibility characterizes the clothing and accessories, balanced by sophisticated structure. Fabrics including cotton and linen gabardines to light silk, layered chiffons, cashmeres, fine woolens, various ultra-soft and washed leathers and newly developed Japanese polyesters are soft and luxurious, both functional and pleasant to wear from day to night. Accessories are colorful and polished-looking, the soft leathers given gentle shape by means of innovative construction techniques.

Mona Kuhn is regarded as one of the most significant artists working in contemporary photography today. Born in Sao Paolo, of German descent, she is now based in Los Angeles. Kuhn is best known for her large-scale, dream-like photographs of nudes. She has described her work as redefining ways of looking at the body, and indeed her nudes often reference classical themes, always with a light and insightful touch. Her work has been exhibited and/or included in the collections of the Los Angeles County Museum of Art, the Museum of Photographic Art in San Diego, the Leopold Museum in Vienna, the Royal Academy of Art in London, and Schwarz Fine and Contemporary Art in Berlin, among other prestigious institutions. Her fifth monograph, titled Bordeaux Series (Steidl), was published in September, 2011.

Kuhn’s approach to her photography is unusual in that she usually develops close relationships with her subjects, resulting in images of remarkable naturalness and intimacy. It was this closeness and unforced sensuality that led Bottega Veneta Creative Director Tomas Maier to approach her for the Cruise 2011/2012 collection. “I wanted to express a closeness in this campaign, the kind of intimacy that is at the heart of Mona’s images,” he explains. “In addition, her precise approach to light and color, and the freshness of her images, are well suited to the mood of the season. I’m very pleased with the images that resulted from our work together.”

A video documenting the photo shoot will be added November to the Art of Collaboration video series at bottegaveneta.com.

Bottega Veneta
Discretion, quality, and craftsmanship — Bottega Veneta has created a new standard of luxury since its founding in Vicenza in 1966. Steeped in the traditions of Italy’s master leather craftsmen and long celebrated for its extraordinary leather goods, Bottega Veneta has recently emerged as one of the world’s premier luxury brands. The company’s famous motto, “When your own initials are enough,” expresses a philosophy of individuality and confidence that now applies to a range of products including women’s and men’s ready-to-wear, fine jewelry, furniture, and more.

While Bottega Veneta continues to grow, the qualities that define it are unchanging: outstanding craftsmanship, innovative design, contemporary functionality, and the highest quality materials. Also constant is Bottega Veneta’s commitment to its ateliers, where artisans of remarkable skill combine traditional mastery with breathtaking innovation. Indeed, there is an unusual and inspired collaboration between artisan and designer at the heart of Bottega Veneta’s approach to luxury, symbolized by the house’s signature intrecciato woven leather. In the summer of 2006, in recognition of the importance of artisanal craftsmanship and the fragility of this traditional way of life, Bottega Veneta opened a school to train and support future generations of leather artisans.

The most recent chapter in Bottega Veneta’s history began in February 2001, when the company was acquired by PPR Luxury Group, formerly known as Gucci Group. Creative Director Tomas Maier came on board in June of that year and presented his first collection, Spring-Summer 2002, to immediate critical acclaim. From the start, the house’s sensibility was refined, sensuous, and intensely personal, designed for a customer who is sophisticated and self-assured. In the years since, Bottega Veneta has introduced exciting additions to the collection, including fine jewelry, a watch, furniture, and home accessories, while continuing to offer an exclusive and coveted assortment of ready-to-wear, handbags, shoes, small leather goods, eyewear, luggage, and gifts.