Scouting's Centennial is Out of This World - Literally 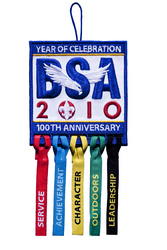 “At the earliest opportunities in Scouting, we are exposing young people to space exploration and preparing them for future work in science and technology fields."

The Boy Scouts of America (BSA) has officially taken its 100th Anniversary Celebration to new heights. Four Year of Celebration patches left the stratosphere today as cargo on the space shuttle Discovery’s STS-131 mission to the International Space Station. A Year of Celebration, A Century of Making a Difference is the BSA’s 100th Anniversary patch-earning program that allows participants to earn recognition for making a difference in their communities.

“This collaboration between the BSA and NASA underscores a long history between Scouting and space programs,” said BSA Chief Scout Executive Bob Mazzuca. “At the earliest opportunities in Scouting, we are exposing young people to space exploration and preparing them for future work in science and technology fields.”

The relationship between Scouting and space stretches to before man’s first steps on the moon. In May 1964, 29 of America’s 30 astronauts visited Philmont Scout Ranch, the BSA’s high-adventure base in Cimarron, N.M., for a two-week training trip to learn geological mapping and seismographic studies in preparation for the Apollo programs. Of the 12 astronauts who have walked on the moon, 11 were Boy Scouts. More than half of all U.S. astronauts have been involved in Scouting, including well-known astronauts Neil Armstrong and Jim Lovell, who are Eagle Scouts.

In 2010, the BSA will introduce three new technology-driven merit badges, including Robotics. During STS-131, mission specialist Dorothy Metcalf-Lindenburger will use the robotic shuttle arm to inspect the space shuttle for any damage that may have occurred during launch or while in space. Other members of the STS-131 crew will use the space station's robotic system, Canadarm2, to move equipment from the shuttle's payload bay to the station.

Though firmly rooted in an unchanged set of core values, the BSA is committed to remaining current and relevant by adapting how it delivers programs and reaches its audiences. The BSA’s three new merit badges—Robotics, Inventing, and Geocaching—are indicative of how it is adjusting to prepare young people to become leaders and participating citizens in an increasingly technological world. Today, Scouts can read the Boy Scout Handbook on an iPhone, use GPS devices in addition to a map and compass, and receive BSA news via social media channels such as Facebook, Twitter, and YouTube.

Any Scout, leader, or Scouting alumnus, can earn five special award ribbons that hang from the Year of Celebration patch. Reflective of a century of Scouting values, the ribbons honor dedication to leadership, character, community service, achievement, and the outdoors.

After the patches return from space, they will be displayed as part of the 100th Anniversary exhibit at the National Scouting Museum in Irving, Texas. Eight major national 100th Anniversary engagement programs have been designed to reintroduce Scouting to the next generation of young leaders and reconnect millions of alumni with the organization. Flying high on the space shuttle isn’t the only high-speed recognition of the BSA’s 100th Anniversary. Earlier this year, the BSA announced its Scout-themed IndyCar collaboration with Dale Coyne Racing. Just last week, Union Pacific unveiled UP No. 2010 Boy Scouts of America, only the 14th commemorative locomotive in the company’s history.