Rocker Bret Michaels has been seen all over TV, on Snapple bottles, and in concert in recent weeks (including last Friday's Good Morning America concert in NYC) wearing one particular white cowboy hat adorned with a black Roman cross. The designer who handmade that hat for Bret says she's inundated with orders from people who want the same hat. 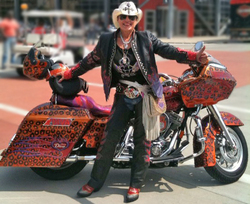 Judging by the number of orders pouring into her studio, the designer of the custom hat worn by Bret Michaels throughout this last season of NBC’s Celebrity Apprentice says the white cowboy hat with black Roman cross is the most popular hat in America right now. “Since Celebrity Apprentice aired, I’ve been inundated with orders for the hats that Bret wore during his appearance on Celebrity Apprentice,” says Diva Amy Skaling, the entrepreneur who designs and hand makes the stylish cowboy hats. “Everyone wants to get the same look as Bret!”

Television viewers everywhere got to know Poison lead singer Bret Michaels all over again when he appeared on and won this most recent season of Celebrity Apprentice. Throughout the show, Bret wore three of the eight cowboy hats handmade by Diva Amy exclusively for Bret, including a white hat emblazoned with a black Roman cross, and a black hat adorned with feathers and a Harley-Davidson spark plug. During the finale, Bret passed around Diva Amy’s other hats to his team members to wear for his Snapple presentation. “By far, the most requested hat is the white with black Roman cross,” says Skaling. “To thank Bret for wearing my hats, I’m donating 10 percent from the sale of each hat to the Bret Michaels Foundation, which in turn funds the American Diabetes Foundation, the group for which Bret was playing on Celebrity Apprentice.” Michaels also wore the white cowboy hat with black cross when he appeared on the finale of American Idol, and can also be seen wearing it on every bottle of Bret’s Blend Diet Snapple Trop-A-Rocka.

Diva Amy created her company, Team Diva, 12 years ago to design hats, T-shirts and accessories with rock and rollers and motorcyclists in mind. In addition to Bret, other celebrities who wear Team Diva hats include Paris Hilton who sported the embellished cadet caps at the Sundance Film Festival last year; Ringo Starr bought a few cowboy hats; and Miley Cyrus has been seen wearing the “Bret Michaels” hat. All styles are original by Diva Amy who painstakingly applies all the nail heads, semi precious stones, Swarovski crystals, leather and other embellishments on her creations herself.

An entrepreneur who spreads the word about her company by riding her leopard custom painted Harley-Davidson Road Glide around the country, Diva Amy recently returned from a 3,000-mile road trip where she raised money for the Fall Heroes Veterans Fund as a member of the Diamond Posse. Emblazoned with 50,000 Swarovski crystals and custom drilled and embellished parts, the Diva Glide attracts attention wherever Diva Amy rides with it. “My best inspiration and design ideas come when riding the Diva Glide on the open road,” says Skaling. “Riding that motorcycle really defines me.”

Before following her dream and starting Team Diva, Skaling worked as a sales rep for a major skiwear company for 29 years. She is an inspiring example of realizing a dream and making that dream come true. To learn more about Diva Amy, the Bret Michael’s hat, and Team Diva, visit TeamDiva.com or call Diva Amy for an interview at 818.519.7842.