This 40-day devotional from Brian “Head” Welch, former lead guitarist of Korn and the New York Times bestselling author of Save Me From Myself, is an intimate tour through the Bible passages that have meant the most to him on his trying journey from substance abuse to salvation. Save Me From Myself, Welch’s self-effacing story of his fight against addiction and his reawakening to divine love, has made the metal band icon into a hero of Christian rock. 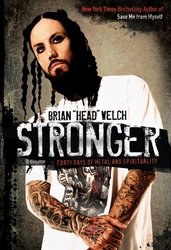 In January 2005 I found God, and I’ve never been the same since. For years before that life-changing decision, I had been the lead guitarist for Korn, traveling the world making millions of dollars, all while being hopelessly addicted to crystal meth.

New York Times bestselling author Brian “Head” Welch returns with a raw and unforgettable journey through his life with Christ in STRONGER: Forty Days of Metal and Spirituality(HarperOne; December 2010; Hardcover; $22.99; 9780061555824). In 2007, Brian “Head” Welch, the former lead guitarist for the hard-rock band Korn, shared the dramatic story of his music, drug addiction, and miraculous redemption through Jesus Christ in Save Me from Myself. Now, in STRONGER, he writes about the scripture that has helped lead him into deeper intimacy with God.

Continuing to share the lessons from his personal life, Head offers an unflinching forty-day devotional of scriptures that have helped him to mold his Christian faith and find light during life’s darkest moments. Written with passion and openness, this forty-day journey includes stories from Head’s past and present. He speaks candidly about his bouts of depression since finding God, his struggles against the darkness as he’s tried to understand his faith, and how, through these times of weakness, God’s written word has been one of the keys to making him stronger than he’s ever been. Filled with original, never-before-seen, abstract drawings by artist Joshua Clay that depict and enhance Head’s words, Stronger is a remarkable look at how scripture can influence and impact anyone’s life. Applying both the Old and New Testaments to every aspect of his life—from his time with Korn to his new solo career to his life-altering decisions to his relationship with his daughter—Head details how, no matter what the issue, God has always provided the guidance he’s needed to become a stronger person.

One part journal chronicling his evolving relationship with God, one part spiritual testament to the undeniable strength of the Bible, STRONGER is a devotional unlike any other—both a moving tribute to the transformative power of the word and a no-holds-barred look at what it means to give yourself completely to Jesus Christ.

From the book:
“In January 2005 I found God, and I’ve never been the same since. For years before that life-changing decision, I had been the lead guitarist for the band Korn, traveling the world and making millions of dollars, all while being hopelessly addicted to crystal meth. I had a daughter I was responsible for, and I was failing her. I had a life I was throwing away, and I woke up each day wishing that some force would simply take me out of my misery. Thankfully that didn’t happen. Instead of that force taking me out of my misery, I got a new reason to live.”

About the Author:
Brian “Head” Welch was a founding member of Korn. In 2004, after years of struggling with substance abuse, he experienced an intense spiritual awakening that helped him overcome his problems with drugs and alcohol. He wrote about this experience in his 2007 New York Times bestselling memoir, Save Me from Myself, which was also the title of his first solo album, and Washed by Blood. Today he focuses on raising his daughter, Jennea, as a single father and is dedicated to building his solo career.