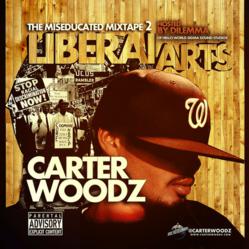 Carter Woodz, also known as Woodz, is a hip-hop artist who makes thought provoking music. He was born and raised in and around Miami until he settled in Philly in 2005. As a student of both the streets and America’s institutions of higher learning, he has a lot to say about the state of the world today. Topics in his music range from social problems to political issues in a carefully crafted manner that is relatable to the average person. His unique style is compiled of passion, intellect, and rawness comparable to A Tribe Called Quest, Nas, and Outcast.

His first official released project was “The Miseducated Mixtape: PreRequisites.” The versatile mixtape had conscious components similar to Illmatic as well as a few club bangers. His video for the track “IgNant Niggaz” is an award nominated video/short film.

While he is focused on his music career, Woodz is also working on completing his PhD in philosophy. Keep up with all Carter Woodz updates by following him on Twitter.