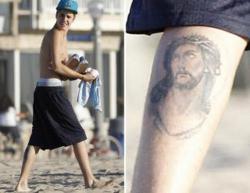 Explore Talent, a premier online social-network for talented people in the entertainment industry, announced results of a new poll today on the Facebook platform, "Do You Think Justin Bieber's New Tattoo Ruins His Good Boy Image?" ExploreTalent.com is a professional site that connects actors, models, musicians and dancers in the United States. The online community has been responsible for new collaborations and business ventures in entertainment. Explore Talent is responsible for countless models and actors getting acting auditions and modeling jobs through casting calls. Explore Talent also helps aspiring entertainment professionals further their careers with contests that showcase their profiles to members of the social media community. Furthermore, the Explore Talent site features celebrity videos, exclusive interviews with actors, actresses, and musicians, such as Joan Rivers, Akon and T-Pain.

When asked, "Do You Think Justin Bieber's New Tattoo Ruins His Good Boy Image?" 73 people responded on the Facebook platform. Justin's new tattoo is of Jesus Christ, and is featured on the back of his leg. Most people said, no, the tattoo doesn't tarnish his good image.

Facebook's mission is to give people the power to share and make the world more open and connected. Facebook users communicate and share information through the social graph, the network of connections and relationships between people. With more than 800 million active users, Facebook is the fourth-most trafficked website in the United States.

In 2007, Facebook Platform was launched to empower developers and entrepreneurs around the world make the Web more social for users. Millions of Facebook users return to the site each day, providing unparalleled distribution potential for applications and the opportunity to build a business that is highly relevant to people's lives.

Explore Talent's proprietary software and vast infrastructure is the most advanced entertainment-based technology of its kind. The site's popularity is based on the fact that there are many ways for talent to network, make friends and connect with other industry players, participate in a wide variety of contests and earn prizes for being active on the site. The easy access to a pool of six and a half million members attracts industry players who are posting every month about 50,000 new auditions and job openings, which is 30 times more than any other site.

For more information on Explore Talent, go to http://www.ExploreTalent.com.