Research Shows the Largest Religion in the United States is Catholic; the Second is Inactive Catholics

Today more and more American Catholics are opting out of attending church altogether including 20% of Hispanics, says former Catholic and now minister and author Tim Lott. "I have personally experienced the boredom at Sunday Mass, I questioned the man-made rules of my faith along with the churches rituals, only to find that I was empty inside after thirty-eight years of religion." Now, through his personal journey of searching for answers after a tragedy stuck in his life, he has discovered what is being called, "a survival kit for the casual churchgoer." 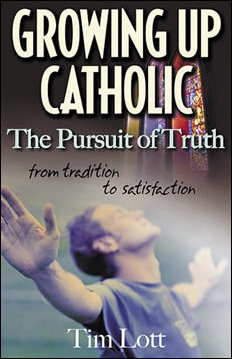 We as men need to be the leaders in our home and this includes the spiritual leader as well. We build the foundation for our family to follow, if that foundation is weak what does it say about us as men and leaders of our household, our children and their future

Tim Lott, author of Growing Up Catholic The Pursuit of Truth From Tradition to Satisfaction says, "You, too, will benefit by discovering this same tremendous joy and peace that I have found, a life of inner happiness and harmony, no matter what your circumstances may be. Today many Catholics who attend Sunday mass are simply going through the motions feeling secure that they have enough religion to sustain them. Many leave church feeling empty inside, they want to know why this void still exists and what to do about it, while others simply stop going."

In his new book Lott brings to the forefront the problems parishioners battle with today and how to overcome them.

Growing Up Catholic The Pursuit of Truth: from tradition to satisfaction was written as a result of a man who questioned his faith after thirty-eight years. Realizing he had been going through the motions of religion which had been taught from childhood, he sought to find the reasons why there was emptiness where so much religion had been before. Catholics have traditionally been more consistent in church attendance than Protestants. However, that trend has reversed course, and Catholics have been more likely than Protestants to earn the un-churched label throughout the past decade and the trend is not slowing down.

Growing Up Catholic The Pursuit of Truth is just that, a search for truth through the deep complicated Catholic beliefs and rituals, which forces you to ask the question, "Am I who I thought I was?" By asking such a question you are challenged to step out of your comfort zone and examine your inner self.

It is a known fact that parishioners, both men and woman are questioning their Catholic faith, but men seem to be facing this turmoil and doubt more than women today as it indicates in the lack of church attendance each week by men. "We as men need to be the leaders in our home and this includes the spiritual leader as well. We build the foundation for our family to follow, if that foundation is weak what does it say about us as men and leaders of our household, our children and their future," said Lott.

In May 2007, the Barna Group showed more than three-quarters of moms identify "family" to be their highest priority. At the same time, a majority of mothers strongly agree that their faith is very important in their life. In contrast, fathers also tend to list family as their top priority in life, yet they are much less likely to equally attribute importance to faith. "Unfortunately, many men are not the spiritual leaders of their family," said Tim Lott. He has discovered answers through his own personal experience of searching for truth about religion, faith and God in a simple and practical way that completely changed his life and altered his approach to church and God. "This book is a survival kit for today's casual churchgoer. I wish that I had the book twenty years ago," said Todd Oetken a current Catholic and financial planner.

Tim's new book, Growing Up Catholic The Pursuit of Truth from tradition to satisfaction is his personal struggle and testimony of a man who grew up Catholic and at the age of thirty-eight, after a tragic event in his life, discovered that his faith could no longer support him spiritually. He sat out to find the answers to why.

Tim is a former Catholic who left the secular business world and now is an ordained minister. He has worked on staff at Northeast Christian Church in Louisville, Kentucky, as the Director of Ministries, and at Community Christian Church of Fort Lauderdale, Florida, as the Minister of Involvement. Tim started teaching the "Growing up Catholic" class in 2002 at Northeast. His book is distributed by Bookworld and will be available June 2007 in all major book stores but is available for pre-order at http://www.GrowingUpCatholic.net. ISBN 978-0-9791188-3-8

Searching for answers?Do you walk away from church feeling empty? I did too until I discovered a better way to live life.

What People Are Saying About The BookComments from people around the country.