Cell Phone Radiation: We Know the Dangers, What are the Solutions? Ann Louise Gittleman Ph.D. has a Master Plan for Safety

ZAPPED a new book by health expert, Ann Louise Gittleman Ph.D. is the first comprehensive, step-by-step guide to protecting yourself from everyday exposure to hazards like cell phone radiation. Award-winning author, nutritionist, and First for Women magazine columnist Ann Louise Gittleman combines the best of energy medicine with the latest scientific research in a user-friendly plan designed to safeguard you and your family. 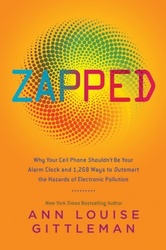 Zapped: Why Your Cell Phone Shouldn't Be Your Alarm Clock and 1,268 Ways to Outsmart the Hazards of Electronic Pollution by Ann Louise Gittleman

Cell phone safety should be our number one priority for our children and ourselves.

In 2005, Ann Louise Gittleman was diagnosed with a benign tumor of the parotid, one of the salivary glands located just below the earlobe. It's a very rare tumor most often caused by ionizing radiation from X-rays, which she hadn't been exposed to. But, she had been addicted to her cell phone, and on it constantly, for years.

In 2008, researchers in the American Journal of Epidemiology found that individuals who kept their cell phone against one side of their head for several hours a day were 50 percent more likely to develop parotid tumors.

Unfortunately, like most Americans, she was under the false assumption that cell phones and other household electronics were safe. Now, she knows better. And it is even more crucial to be aware of the danger to children.

Paul J. Rosch, MD, clinical professor of medicine and psychiatry at New York Medical College and emeritus member of The Bioelectromagnetics Society says "Children are more severely affected because their brains are developing and their skulls are thinner. A two-minute call can alter brain function in a child for an hour, which is why other countries ban or discourage mobile phone use under the age of 18.”

In fact, the very electronic and digital innovations that have made modern life more convenient and efficient are also exposing people to thousands of artificial electromagnetic frequencies and wavelengths never before experienced by human beings.

There are simple ways to reduce exposure in the rooms where Americans spend the most time in—the bedroom, family room, and home office:

2. Walls do not stop magnetic fields
The backs of refrigerators produce large electromagnetic fields which go through walls—so if a family room shares a wall with the refrigerator, the sofa should not be against that wall. It is also recommended to stay out of the kitchen when self-cleaning ovens are operating; these oven settings use very high wattage to burn debris off the oven walls.

3. Don’t cradle your laptop
It may be called a laptop, but pregnant women especially should keep a good distance. Even before birth, children are exposed to electropollution in the womb. Since a fetus spends 40 weeks essentially floating in a sack of water (a well known conductor of electricity), it is particularly vulnerable.

Consumers need to be more aware. San Francisco became the first city in the nation to adopt an ordinance requiring retailers to inform consumers about the radiation levels of mobile phones at point of sale. This and similar measures should be implemented in every retail outlet selling mobile phones (and other electronics) throughout the country.

Everyone's at risk when it comes to electropollution, the new invisible pollutant. It was once thought cigarettes, lead paint and tanning beds were safe. Electropollution has the potential of being even more deadly for people now, future generations and our planet.

Ann Louise Gittleman is an award-winning New York Times best-selling author of over 30 books on health and healing. Her latest,Zapped; Why Your Cell Phone Shouldn’t be Your Alarm Clock and 1,268 Ways to Outsmart the Hazards of Electronic Pollution, was just published by HarperOne.