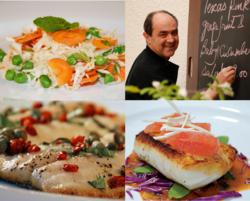 Chef Gorji, who is on the front lines of the "citrus revolution," specializes in bringing new twists to the old culinary traditions of the Mediterranean basin.

Diners are responding to refreshing citrus flavors and perceive them as healthier choices.

America’s emerging embrace of the tangy taste of sour foods is making headlines. On the national airwaves (American Public Media Marketplace Podcast), in foodie blogger circles and, most importantly, in high-end restaurant kitchens from coast to coast. Chefs across the country are tickling diners' tastebuds with tart and sour accents using tangy fruits such as limes, lemons and grapefruit as well as greek yogurt and goat cheese.

When it comes to popular sour fruits, limes are leading the pack. The small, green fruit, which was once relegated to the sidelines as a garnish, squeezed for margaritas or splashed in tonic, is now getting co-star billing on the food front. In fact, limes have just been named as the 2013 flavor of the year by Firmenich, a national trend-forecasting company. “Lime is a flavor that both comforts and excites,” reports the company’s researchers, who observe trends within the food and beverage industry. “We’ve seen every fruit variety under the sun make its way from the edge to the mass market over the last few years. The shift is now back to more classic tastes, particularly those with a complex profile, which today’s more sophisticated consumers tend to prefer.”

That’s not news to Dallas’ Chef Gorji, who has long been on the front lines of the sour and citrus revolution, having recognized the culinary importance that tartness brings to flavor, and especially, its role in his "New Mediterranean" menu featured at his intimate restaurant, Canary By Gorji, which celebrates its 10th birthday this year. “It’s really a matter of balance,” says Gorji who grew up cooking with sour fruit (Throughout his childhood, he helped his family prepare lime juice, sour grape juice and tomatoes to store in their cellar to be available for cooking during the year).

At his Dallas restaurant, he specializes in bringing new twists to the old culinary traditions of the Mediterranean basin. Gorji has become known to diners and critics, alike, for his locally sourced, fresh and flavorful creations along with his gregarious front-of-the-house bonhomie. In a recent review, "The Dallas Morning News" critic Leslie Brenner highlighted the use of citrus accents throughout the menu, notably on an arugula and veal bacon salad in a lime dressing. And food critic Nancy Nichols of Dallas’ city magazine, "D," says his filleted trout, served with white wine and lemon sauce is topped with tart barberries and capers…so clean; so delicious." Nichols also named the celery root salad as one of "The Best Bites of 2012.”

But the culinary use of citrus fruit should not be labeled as trendy, says Gorji. “It is a change in how we perceive what we eat." As reported, sour foods are really becoming more popular because of what they aren’t: sweet. People are much more health conscious today and sweet has a negative connotation with diet and health concerns. Gorji adds that diners have responded to the refreshing flavors and perceive them as healthier choices.

Many of Gorji's citrus-inspired recipes are featured in his upcoming cookbook "Zing! By Gorji." His pink grapefruit and goat cheese salad and trout with lime and barberry sauce are featured here.To get on the mailing list for an advance copy of the new cookbook, email the chef at chefgorji@)canarybygorji.com.