April 20 is significant because over the years “420” has become a counterculture holiday, where the primary mode of celebration is smoking marijuana publicly. 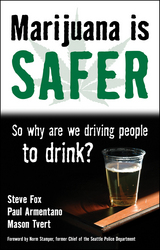 We’ll be offering the free download to more than 200,000 people. Add to that the enormous reach of Scribd, and we’re poised to make a massive impact on people’s perceptions of marijuana.

It runs against the most basic business acumen to give your product away for free, but next week that is exactly what Chelsea Green Publishing plans to do.

April 20 is significant because over the years “420” has become a counterculture holiday, where the primary mode of celebration is smoking marijuana publicly.

The move is intended to raise awareness of marijuana’s relative safety when compared to alcohol in the face of California’s impending referendum for legalization in November. April is also coincidentally National Alcohol Awareness month.

“This promotion is all about getting the message out there,” said Kate Rados, Chelsea Green’s Director of Digital Initiatives. “Via our partners and web communities, we’ll be offering the free download to more than 200,000 people; we’re poised to make a massive impact on people’s perceptions of marijuana.”

Marijuana is Safer, written by nationally recognized marijuana-policy experts Steve Fox, Paul Armentano, and Mason Tvert, compares two of the most popular recreational substances in the world -- marijuana and alcohol; asking why society punishes those who choose to engage in a relatively safer activity.

"We are excited about this special 4/20 event," said Fox. "The reason we wrote this book is to educate the public about the relative harms of marijuana and alcohol. One obstacle to achieving this goal, however, is getting the book in the hands of people who need that kind of education, but probably would not purchase the book on their own. So we not only want people to download the book, we want them to send it to as many people as they can. It is not necessarily the best strategy for royalties, but we wrote this book to serve a purpose, not to get rich."

For 26 years, Chelsea Green has been the publishing leader for books on the politics and practice of sustainable living. They are a founding member of the Green Press Initiative and have been printing books on recycled paper since 1985, when our first list of books appeared. Chelsea Green leads the industry both in terms of content -- foundational books on renewable energy, green building, organic agriculture, eco-cuisine, and ethical business -- and in terms of environmental practice, printing 95 percent of our books on recycled paper with a minimum 30 percent post-consumer waste and aiming for 100 percent whenever possible. This approach is a perfect example of what is called a ”triple bottom line“ practice, one that benefits people, planet, and profit, and the emerging new model for sustainable business in the 21st century. Learn more at http://www.chelseagreen.com or via Twitter: @ChelseaGreen

Nationally recognized marijuana-policy experts Steve Fox, Paul Armentano, and Mason Tvert compare and contrast the relative harms and legal status of the two most popular recreational substances in the world -- marijuana and alcohol. Through an objective examination of the two drugs and the laws and social practices that steer people toward alcohol, the authors pose a simple yet rarely considered question: Why do we punish adults who make the rational, safer choice to use marijuana instead of alcohol?

Marijuana Is Safer reaches for a broad audience. For those unfamiliar with marijuana, it provides an introduction to the cannabis plant and its effects on the user, and debunks some of the government's most frequently cited marijuana myths. For current and aspiring advocates of marijuana-law reform, as well as anyone else who is interested in what is becoming a major political battle, the authors spell out why the message that marijuana is safer than alcohol must be a prominent part of the public debate over legalization.

Most importantly, for the millions of Americans who want to advance the cause of marijuana-policy reform -- or simply want to defend their own personal, safer choice -- this book provides the talking points and detailed information needed to make persuasive arguments to friends, family, coworkers, and elected officials. More at: http://www.chelseagreen.com/bookstore/item/marijuana_is_safer:paperback and via Facebook at http://www.facebook.com/MarijuanaisSafer?ref=ts

Paul Armentano is the deputy director of NORML (The National Organization for the Reform of Marijuana Laws) and the NORML Foundation. A recognized national expert in marijuana policy, health, and pharmacology, he has spoken at dozens of national conferences and legal seminars and has testified before state legislatures and federal agencies. He appears regularly as a guest on national television, including Fox News and MSNBC, and his work has appeared in over 500 publications. Armentano is the 2008 recipient of the Project Censored Real News Award for Outstanding Investigative Journalism. He currently lives in California with his wife and son.

Mason Tvert is the cofounder and executive director of Safer Alternative for Enjoyable Recreation (SAFER) and the SAFER Voter Education Fund. He appears frequently in the news and travels the country promoting the "Marijuana Is Safer Than Alcohol" message. He resides in Denver, where he serves on the city’s Marijuana Policy Review Panel appointed by Mayor John W. Hickenlooper.

Steve Fox is the Director of State Campaigns for the Marijuana Policy Project (MPP), the nation's largest organization dedicated to reforming marijuana laws. From 2002–2005, he lobbied Congress as MPP's Director of Government Relations. He cofounded Safer Alternative for Enjoyable Recreation (SAFER) in 2005 and has helped guide its operations since its inception. He is a graduate of Tufts University and Boston College Law School and currently lives in Maryland with his wife and two daughters.