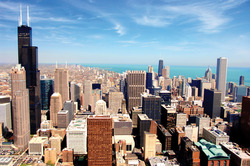 There is no better time to visit Chicago, the city that Lonely Planet Guidebooks just named the top U.S city in the world. As the home of President-elect Barack Obama and the U.S. Candidate city to host the 2016 Olympic and Paralympic Games, Chicago has captured the attention of the world.

In 2009, with new attractions, tours, and hotels; major anniversary celebrations; and an array of productions by Tony award-winning theaters, Chicago will continue to be a premier travel destination. For more information about planning a trip, call 1.877.CHICAGO or visit http://www.cityofchicago.org/tourism. Here is what to look for in 2009.

All information and dates were correct as of press time.

Beluga Whales and Dolphins Return Home as Shedd Aquarium’s Oceanarium Reopens
The beluga whales and Pacific white-sided dolphins return to their newly-renovated, 3-million-gallon saltwater home when the Oceanarium, one of the most successful conservation-based marine mammal habitats in the world, reopens at the Shedd Aquarium in early summer. http://www.sheddaquarium.org

Buckingham Fountain: A Chicago Icon Gets a Face Lift
One of Chicago’s most iconic attractions and Grant Park’s crown jewel is undergoing a $25 million renovation and restoration and reopens on April 1.The project also includes a restoration of the pathways and landscaping that surround one of the world’s largest fountains. http://www.restorethefountain.com

ANNIVERSARY CELEBRATIONS
Burnham Plan Centennial: Bold Plans Big Dreams
The celebration of the regional plan that shaped city planning and Chicago history begins on June 19 with the unveiling of two temporary pavilions in Millennium Park designed by acclaimed architects Zaha Hadid and Ben van Berkel. Hundreds of events, exhibits, concerts and building projects are planned to mark the 100th anniversary of Chicago architect Daniel Burnham’s Plan of Chicago. Most events take place from June to October. The pavilions stay open for five months before they are taken apart and recycled. http://www.burnhamplan100.org

Award-Winning Millennium Park Celebrates Five Years
More than 15 million people from all over the world have visited this award-winning center for art, music, architecture and landscape design since it opened in July 2004. The 24.5-acre park features the Frank Gehry-designed Jay Pritzker Pavilion, the most sophisticated outdoor concert venue of its kind in the United States; the interactive Crown Fountain by Jaume Plensa; the contemporary Lurie Garden designed by the team of Gustafson Guthrie Nichol, Piet Oudolf and Robert Israel; and Anish Kapoor’s hugely popular Cloud Gate sculpture. Free events and activities to celebrate the Park's 5th anniversary will be announced. http://www.millenniumpark.org

CHICAGO ARCHITECTURE AND REAL ESTATE
Facade Revealed at Louis Sullivan Landmark
The restored façade and cast iron ornamental work of Chicago architect Louis Sullivan’s landmark building at State and Madison streets (formerly Carson, Pirie, Scott) is being revealed in July. One of the most important structures of early modern architecture and a classic example of the Chicago School of architecture, it has been redeveloped as the Sullivan Center, a mixed-use retail/office building.

Block 37 Grand Opening in the Loop
With a grand opening scheduled for fall, this mixed-use development bounded by State, Dearborn, Randolph and Washington Streets, features a four-story mall including retailers such as Zara, Apple Computer, Puma and Lululemon, and a 16-story office building that is already home to CBS2’s new studios. Plans include a hotel and residences to be phased in at a later date.

Trump Hotel & Tower: World’s Tallest Residential Project Completed
At 92 stories and a height of 1,362 feet, the building will be the second tallest in Chicago and the tallest residential building in the world when it is completed later this month. The river walk retail shops and Sixteen restaurant’s outdoor terrace, with one of the best views in the city, open in the Spring, when the entire project is scheduled to be completed. http://www.trumpchicagohotelcom

HOTELS
theWit Hotel: Eco-Friendly Luxury in the Loop
Opening in May, theWit – A Doubletree Hotel is a 298-room eco-friendly luxury hotel in the heart of Chicago’s Loop and Theater District. It features a 40 person private screening room, a rooftop indoor/outdoor lounge, an upscale Gastro Pub, and a chef-driven fine dining restaurant. http://www.thewithotel.com

Hotel Felix: Upscale Boutique in the Gold Coast/River North
This 225-room upscale boutique property in the Gold Coast/River North emphasizes beautiful craftsmanship and environmentally conscious design. Opening in the spring, the hotel features a 1926 historic exterior, a contemporary two-story lobby with a uniquely designed water element, and a restaurant with a lounge and outdoor café. http://www.hotelfelixchicago.com

TOURS
Chicago For Kids Audio Tour: Unique Way to Learn About the City
Kids can go on adventures throughout the city with this audio tour and interactive web site. It features eight destinations plus games and challenges that highlight the rich culture and history of Chicago. Stops include Millennium Park, The "L", the Picasso Sculpture, and North Avenue Beach. Interviews with famous Chicagoans including former Chicago Cub Ryne Sandberg and cheesecake manufacturer Marc Schulman provide kids with the ultimate insider’s view of Chicago. http://www.downloadchicagotours.com

Chicago Architecture Foundation Launches Four Walking Tours
See the architectural capital of the world and its rich legacy from a fresh angle. http://www.architecture.org

THEATER
Broadway Comes to Chicago
Highlights of the 2009 Broadway in Chicago (http://www.broadwayinchicago.com) season in the historic Downtown Theater District include:

Chicago’s Olympic Bid
In June of this year, the International Olympic Committee selected Chicago as the U.S. Candidate city to host the 2016 Olympic and Paralymic Games. The final selection will be made in October. Chicago is honored to be competing for the privilege of hosting the 2016 Olympic and Paralympic Games alongside such world-class cities as Madrid, Rio de Janeiro, and Tokyo. http://www.chicago2016.org

The Chicago Office of Tourism, a division of the Department of Cultural Affairs, is the official City agency dedicated to promoting Chicago to domestic and international visitors and to providing innovative visitor programs and services.

The Art Institute of Chicago, located at Michigan and Monroe, opened in 1893