Jason Pratt, novelist, lay theologian and orthodox Christian universalist, notices a peculiar convergence of statistics presented by Ed Stetzer (director of LifeWay Research) during a conference on Reformed theology and the Southern Baptist Convention last week. The statistical anomaly suggests as many as 40 percent of recently graduating SBC pastors may be ready to consider universalism. 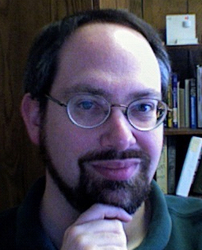 The affirmation statistics combine two categories together, too

These statistics, compiled from two surveys -- a 2006 LifeWay Research study and a 2007 North American Mission Board survey (for their Center for Missional Research) -- have been making headlines this week, in Protestant (and other religious) periodicals as well as on the internet. So far the big news has seemed to be that Baptist seminary graduates going on to work as pastors for Southern Baptist Congregations, are three times as likely as the general population of Baptist ministers to affirm "five-point Calvinism". (Roughly 30 percent of recent pastoral graduates, per the 2007 NAMB survey results; compared to 10 percent of all active pastors in the SBC, per the 2006 LWR survey results. Ed Stetzer's power-point presentation can be found here.)

But Jason Pratt, novelist and lay theologian, finds a far more startling implication in the data reported by Stetzer.

"Weirdly, if I am reading this data correctly, there are just as many recent graduates who affirm or are on the verge of affirming universalism, as who directly affirm tenets unique to strong Calvinism. Maybe more!" says Jason. "Not exactly what I was expecting, to say the least."

Jason cautions that the statistical spread could be misleading and surely has built-in margins of error. "The affirmation statistics combine two categories together, too," he adds. "Those who strongly and those who somewhat agree with certain statements are combined into the results from NAMB presented by Professor Stetzer. Still, the results look suggestive to say the least."

In the 2007 NAMB-CMR survey, Baptist seminary graduates from 1998 to 2004, who now hold church leadership positions, were polled on the following four statements: "I am a five-point Calvinist"; "God is the true evangelist and when He calls someone to Himself, His grace is irresistible"; "People do not choose to become Christians; God chooses and calls people who then respond to them"; and "I give a verbal presentation of the gospel (outside of church) at least once a week". Each respondent was asked, for each statement, to indicate one of four levels of agreement ranging from strongly agree to strongly disagree, or else that they didn't know.

As an aside, Jason comments that the third statement could result in confusion in respondents: "It could be read as a total denial of personal responsibility on the part of the Christian, or else a denial of the statement might be supposed to indicate that God does not seek the salvation of anyone until they choose it. But any educated orthodox theologian, Calvinist or Arminian or Universalist, should be wanting to affirm that God seeks our salvation first and primarily; otherwise we have the spectacle of humans somehow inducing God to save us! There are strong ontological reasons why this must be rejected, if God is (as orthodox Christians believe) the final ground of all reality. If He does not seek to save us from our sins, nothing we do is going to make any difference. Yet at least two of those three groups, and even the Calvinists in practice, would also affirm that we humans have a personal responsibility to choose to accept salvation, much less what we merely happen to believe. The respondent is likely to be left in a cleft stick." This, Jason believes, probably explains why 42 percent of respondents (averaged by graduating year) replied either that they disagreed with the statement or else they didn't know.

"But that's the broccoli. The steak is far more interesting," Jason says. "Out of the points that could have been polled concerning five-point Calvinism, both of the specific-doctrine statements concern the topic of God's persistence and intentional sufficiency for salvation -- one of them directly."

That direct statement, the second in the list, which Jason points out is "far more coherently put than the third one", garnered an average 67 percent affirmation (either strongly affirmed or somewhat affirmed).

"This is important," Jason says, "because this is one of the clear, pivotal disagreements between Calvinists and Arminians. When an Arminian dissents from one or more of the classical five-points of Calvinist soteriology, this is extremely likely to be one of them.

"Boiled down to its essentials, one clear way of distinguishing Calvinists from Arminians involves the question of whether God will continue to act toward the salvation of someone from sin. Arminians affirm that God offers salvation to everyone in true intention (not merely pro forma at best); but that sooner or later He will cease trying to save some people from sin. Calvinists affirm that if God intends to save someone from sin, then He (by God) is going to keep at it until He gets that salvation done!" smiles Jason.

"This is an important issue of trust for Calvinists, beyond the question of whether a soul can actually win its rebellion against God (which few Arminians would agree with anyway, either); because if true then we need not be doubting whether God will give up on us ever. The eventual salvation of whomever God intends to save is secure, no matter how seriously the sinner introduces bumps in the road. Jesus actually calls Simon Peter 'Satan', for example! -- but no one, Calv or Arm or Kath, doubts that Jesus persisted in saving the Apostle Peter from sin.

"The flip side, unfortunately, is that if a doctrine of hopeless condemnation is also insisted upon, then the logical math can only point toward God never having seriously intended to save those other people from sin at all. Yet Arminians insist that there is scriptural evidence, among other reasons, to believe that God would prefer and has an intention to save all sinners from sin.

"Now, what the NAMB poll suggests, is that a strong majority of new Baptist seminary graduates agree with the irresistible grace doctrine: one of two key doctrines over which a Calvinist and Arminian are most likely to decidedly disagree. And yet, only a definite _minority_ identify themselves with five-point Calvinism.

"That leaves a gap of approximately 40 percent who affirm one of the two points most likely to separate a Calvinist and an Arminian on soteriology; and yet this same 40 percent is avowedly not Calvinist!

Orthodox universalists, notably, affirm the basic trust-principle within the Calvinist doctrine of irresistible grace -- Christians can trust God to successfully save us from sin -- but also affirm the intentional scope typical of Arminian dissenters: God intends to save all sinners. "Obviously, where Calvinists and Arminians are going to agree with each other, over against us," notes Jason, an orthodox universalist theologian, "is on the topic of ultimately hopeless condemnation.

"We may be seeing in this Southern Baptist data, though, the seeds or even the first fruits of a grass-root movement toward orthodox universalism -- or perhaps toward some other kind of universalism. The latter would be distressing and problematic, of course," Jason adds, "but the former would be encouraging, I think."

And timely as well. One of the key challenges emanating from popular anti-theism ("not that this is _new_ news," Jason quips), involves attacking the notion of God's hopeless condemnation. "You can see it everywhere in agnostics, atheists, and popular alt-religionists. It's intimately tied into the rejection of 'orthodoxy' per se, because Christians have fought so long and hard to tie that hopelessness together with orthodox theology. Not surprisingly, even when people want to keep some kind of 'Christian' belief while denying the hopelessness, they toss out anything insisted on being associated with it, too."

Jason, who himself is a fantasy novelist, observes that the rejection of hopeless condemnation is linked to a rejection of anything even seriously resembling orthodox theism, by Philip Pullman, whose young-adult trilogy HIS DARK MATERIALS opens its first filmed episode this weekend, Dec 7.

"Sober and professional theologians, as well as laity-in-the-pews, are looking for something more hopeful than what they are hearing from evangelists," says Jason. "When the people in the pews don't get it, they start looking somewhere else. And since most of them don't have much understanding about the implications of trinitarian theism compared to other religious options, they're likely to try to get it outside or apart from orthodoxy.

Jason admits (and cautions) that the data could be misleading as to a trend indication. "For one thing, there has to be some kind of error variance built-in," says Jason, "and that's going to be multiplied twice for two factors. Though then again that works both ways--the spread might be that much _wider_ than 40 percent, too!

"Also, what we may be seeing here could largely be some kind of common mental goof or incoherency, where the respondents in that peculiar gap don't even realize what their position is implying. After all, plenty of people graduate from seminary, fully intending to promote an orthodox belief in God's omnipresence, but then go on to teach that God is completely separated in presence from persons in hell. Or (almost as commonly) they mean to affirm and not deny the unity of the substantial intentions of the Persons, but then go on to teach that God the Son wanted to do one thing in regard to humanity and so convinced God the Father to do something other than what the Father had wanted and intended to do. So that kind of thing happens. Not exactly a compliment to seminaries, but that's how things are.

"I can't help but cynically suspect that the gap in the data may only or mostly be of that sort, to be honest," says Jason. "But the gap _is_ interesting, and is so far unnoticed by analysts publicly yet, I think, either way."

Jason Pratt, who often contributes to the popular journal of the Christian Cadre, has a reading audience in Europe, Asia, Africa, Australia and the Americas. His recent Thanksgiving sermon for the Cadre Journal, available here, discusses the relationship of joy to crucially important claims of orthodox trinitarian theism. CRY OF JUSTICE, his first published book, has been in release for a little over two months; and is the first of an initial trilogy of novels. Jason has made the first section of chapters from Cry of Justice available as a freely distributed novella, which can be downloaded (among other places) from this press release. Jason recently donated 500 full production hardback dust-jacketed copies of Cry of Justice to the World Fantasy 2007 convention in Saratoga, NY; and has sent another 210 promotional copies to the annual film festival of the influential media news/review site Ain't It Cool News this week. He graduated from the University of Tennessee, Knoxville, in 1994.

LifeWay Christian Resources of the Southern Baptist Convention, is one of the world's largest providers of Christian products and services, including Bibles, church literature, books, music, audio and video recordings, church supplies, and Internet services through LifeWay.com. The company also owns and operates 140 LifeWay Christian Stores in 24 states, as well as two of the largest Christian conference centers in the country. It was established in Nashville, TN, in 1891.