Baidoo-Essien Highlights How Important and Significant the Saving Gospel is to the Sinner's Transition in his New Book ‘Examining The Great Commission, A Call To Study'

As the apostles and the early disciples went all over the world to make disciples, how did they reach out to new disciples? Did they have a message that they reached the then world with? Baidoo-Essien in his effort to examine the Great Commission statements searches the scriptures to address these questions in his new book ‘Examining the Great Commission, A Call To Study’. He also notes the importance of the gospel message to the sinner as he or she obeys the gospel. 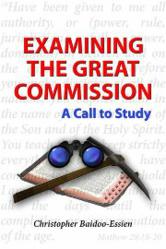 ... the Law, the Prophets, and the Psalms were ... authentic, and well-established sources of authority. If what Jesus was instructing to be done contradicted that which is known in any of these sources, they could by no means take Him seriously.

How one resolves these important salvation questions deserves careful and thoughtful considerations as well as study. To address these questions on his part, Baidoo-Essien in the new book “Examining the Great Commission, A Call To Study” looks at how the apostles made disciples by considering the Great Commission statements in the gospel accounts, what the apostles and the other disciples preached to their audiences in their evangelism efforts such as seen in the second chapter of the book of Acts, and what the apostles expressly taught as the Apostle Paul instructed the Christians in Corinth in the fifteenth chapter of his first letter to the group.

In his efforts, Baidoo-Essien highlights the gospel message or the message of pardon and forgiveness of sins due to the death, burial and resurrection of Christ which Mark and Luke in their version of the Great Commission statement state as the message to be preached or taught to all nations. As this message was taught, the recipients of the message needed to understand what the message meant to their salvation and so the Apostle Paul dealt with that in his epistle to the Christians in Rome. Baidoo-Essien deals with the significance of the gospel message and its implications to the sinner in this new book.