On Saturday, July 28, fifteen hundred Scientologists from across the San Francisco Bay Area gathered to rededicate the Church of Scientology Los Gatos. 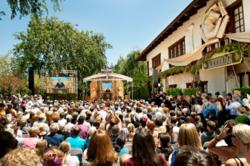 In ceremonies attended by 1,500 local Scientologists and their guests, the Church of Scientology Los Gatos was rededicated on Saturday, July 28, 2012.

A bright beginning dawns for you today, for you now possess the wherewithal to impart the infinite wisdom of L. Ron Hubbard’s technology.

On Saturday, July 28, fifteen hundred Scientologists from across the San Francisco Bay Area gathered to rededicate the Church of Scientology Los Gatos. The ribbon cutting marked the transformation of the Ideal Church of Scientology (Ideal Org) to better accommodate its ever-growing congregation and to extend Church social betterment and humanitarian programs to all communities along the Santa Cruz Mountains and southwestern San Jose.

Ms. Erin Banks, Public Affairs Representative for the Church of Scientology International, highlighted the community partnership and collaboration that has characterized the Church’s work for the past four decades: “Whether meeting with neighbors, local civic leaders, non-profit organizations or city officials, we truly cherish these partnerships and all they have contributed to our history here. This Church has served as a central meeting ground for community engagement and with this rededication we look forward to serving this city for another forty years.”

Church Executive Director Ms. Lynn Hoffman spoke to the greater extent of service this Church may now provide parishioners and the community at large: “We newly open our doors to all who wish to learn more about our religion. Our evening and weekend seminars offer an introduction to fundamental principles of Dianetics and Scientology. Our array of Life Improvement Courses are here to assist anyone in any aspect of life. And our Scientology counseling is available for those seeking spiritual enlightenment. Today our dream is realized so that anyone may walk into our Church and discover not only a welcoming home, but a place where they can find real help and freedom.”

Underscoring the significance of the occasion, Mr. David Miscavige, Chairman of the Board Religious Technology Center and ecclesiastical leader of the Scientology religion, joined local Church officials for the opening ceremony. In his dedication address, Mr. Miscavige told Los Gatos staff and parishioners: “A bright beginning dawns for you today, for you now possess the wherewithal to impart the infinite wisdom of L. Ron Hubbard’s technology. And with that, you bear a sacred responsibility to bring succor to those struck by misfortune, to rescue those abandoned in a forsaken nowhere, and to provide the indiscriminate help that is now our hallmark. These are the cornerstones on which we realize the Aims of Scientology and thus a civilization without insanity, without criminality, without war—a world where the able can prosper, where honest beings have rights and all are free to rise to greater heights. And, yes, the first light of that civilization breaks from just within those doors.”

The Los Gatos Ideal Org now houses state-of-the-art facilities presenting fundamentals of the religion to those new to the religion. Most prominent among them is the Public Information Center—an expansive exhibit of interactive displays containing more than 500 informational video presentations in 17 languages. At the touch of a button, visitors are provided an introduction to the beliefs and practices of Dianetics and Scientology, as well as the life of Founder L. Ron Hubbard. The displays further offer an overview of the many Scientology-sponsored programs for social betterment throughout the world. The Center is open for self-guided tours daily, from morning to night.

The Church’s new Chapel not only accommodates all congregational services, but is also now fully equipped to host a wide range of events for the entire community—including lectures and seminars, film showings, banquets and receptions.

The Church further houses dedicated facilities for a wide range of Introductory Services, including evening and weekend Dianetics and Scientology seminars on fundamental principles and their application in life. Additional classrooms accommodate a wide array of introductory courses imparting Scientology tools to improve any facet of life.

The newly transformed Church also includes an ideal Hubbard Guidance Center for Scientology spiritual counseling, known as auditing, and an expanded Church Academy with multiple study rooms for the training of Scientology counselors.

Ideal Orgs realize Scientology Founder L. Ron Hubbard’s vision for the religion. They not only provide the ideal facilities to service Scientologists on their ascent to greater states of spiritual awareness and freedom, but they are also designed to serve as a home for the entire community and a meeting ground of cooperative effort to uplift citizens of all denominations.

The Scientology religion was founded by author and philosopher L. Ron Hubbard. The first Church of Scientology was formed in Los Angeles in 1954 and the religion has expanded to more than 10,000 Churches, Missions and affiliated groups, with millions of members in 167 countries.

Scientologists and guests from across the Bay Area celebrated the ribbon cutting of the Church of Scientology Los Gatos on July 28, 2012.