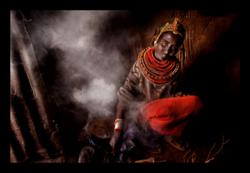 In a cruel paradox that touches half the world's population daily, the mere act of preparing a family meal can prove life threatening. The Global Alliance for Clean Cookstoves reports that nearly three billion people still cook over an open fire, yet this age-old method of cooking ranks as the planet’s fifth largest killer. (Source:http://www.cleancookstoves.org/our-work/the-issues/environment.html)

Rather than focus on the needless suffering associated with traditional cooking practices, director Rodney Rascona points to solutions. Committed to giving a voice to the faceless millions for whom breathing toxic fumes is a life-or-death issue, the filmmaker and his crew embraced the two-month project, undertaking arduous journeys to remote areas on three continents to document stories of a trio of strong, resilient women. In a series of lushly realized vignettes, each recounts how substituting clean and efficient cookstoves dramatically transformed their quality of life.

As an award-winning photographer with a long resume of both advertising and humanitarian projects around the world, Rascona was selected for the project because of his unique ability to portray such a massive problem on a human scale. Through his experience and compassionate insight, we come to know the women’s aspirations and newfound hope for their families’ health and future, thanks to the clean-burning stoves.

Sarah lost both her mother and sister to lung cancer. “The old stoves, they make this world black. They also make us black inside,” says the Gabra tribeswoman, who tends to her family in a small village located in the drought-ravaged lands of Kenya's northern deserts. “If it was my wish, everyone would have a clean cookstove.”

Cooking with traditional wood-burning stoves is not limited to rural environments, however. In Vandana’s urban home not far from the Nepalese border in bustling, color-drenched India, the benefits of her new stove are, literally, cause for celebration. And finally, half a world away we meet soft-spoken Monica, a "campiseno" whose humble, dirt-floor dwelling is perched on the mist-shrouded cliffs of the Peruvian Andes.

In addition to saving countless lives, clean cookstoves empower women by saving time and money - scarce resources in developing nations. Despite vast geographical and cultural differences, the three women share a common desire to use these precious gifts to invest in their children, improve the lives of others, or even generate much-needed income. “Something,” Vandana declares triumphantly, “that shows that we matter.”

“BLACK INSIDE: Three Women’s Voices” was commissioned by the Global Alliance for Clean Cookstoves, an initiative led by the United Nations Foundation and launched at the Clinton Global Initiative in 2010 by U.S. Secretary of State Hillary Clinton. The nine-minute documentary short, which premiered in September at the 2012 Moondance International Film Festival at the Tribeca Theater in New York City, lends an intimate perspective to an urgent global public health and environmental challenge.

Joining Rascona in the project were writer Russ Haan and London-based producer Phil Tidy, who brought together an international post-production team that included editor Warren Meneely, Goldcrest Post London and Prime Focus London. In-country ground logistics were provided by The Paradigm Project, GIZ PERU, Food for the Hungry Kenya and TERI. You can find a complete list of global partners, as well as a Director’s Statement, at the website.

ABOUT RODNEY RASCONA
Award-winning photographer/director Rodney Rascona has utilized his more than three decades of professional experience to help raise revenue and awareness for relief and development organizations around the globe. In addition to his charitable projects, Rascona continues to produce leading work for an international roster of advertising clients. Rascona was named 2010 International Photographer of the Year: Deeper Perspective by the Lucie Foundation for “The Pink Door Photographs,” a poignant collection of iconic portraits featuring earthquake survivors in Haiti (http://tinyurl.com/dy4ex3z).

Rascona’s team is currently in pre-production on a feature-length documentary about the burgeoning cookstove movement. “BLACK INSIDE” will lay out the arguments, the issues and the solutions presented by the brilliant minds engaged in this social imperative.
For more information about Rodney Rascona, please visit http://www.rascona.com.

ABOUT THE GLOBAL ALLIANCE FOR CLEAN COOKSTOVES
The Global Alliance for Clean Cookstoves is a public-private partnership led by the United Nations Foundation to save lives, improve livelihoods, empower women, and preserve the environment by creating a thriving global market for clean and efficient household cooking solutions. The Alliance’s ‘100 by 20’ goal calls for 100 million homes to adopt clean and efficient cookstoves and fuels by 2020. The Alliance is working with its hundreds of public, private, and non-profit partners to help overcome the market barriers that currently impede the production, deployment, and use of clean cookstoves and fuels in developing countries.

Igniting Change Report - A Strategy for the Universal Adoption of Clean Cookstoves and Fuels: http://www.cleancookstoves.org/ignitingchange

"MONICA: The Peruvian Andes"One of three women featured in the film who gives us an intimate view to their world - presented as strong, dignified women who regardless of their cultural differences, share their homes and their aspirations for a better life."VANDANA: Jadishpur India"Living in a pastoral yet urban village along the Nepalese border, Vandana, a devout Hindu woman, speaks of her aspirations for life, which are not that different from those of us in the West."SARAH: Torbi Kenya"Just west of the Somali border and equally south of Ethiopia’s Ogaden, you’ll find one of the most brutally harsh regions of open desert within Kenya’s vast northern territory, yet it’s called home by Sarah and her nomadic tribe the Gabra.

"Igniting Change"A two day drive from Nairobi, Kenya, Marsabit lies at the southeastern edge of the Chalbi Desert. Plagued by the ongoing drought raging across the arid lands throughout the Horn of Africa, a lack of water and firewood makes life difficult