Joseph Patituce, a cleveland defense lawyer, successfully argued that his client was charged with an unconstitutional law. On May 13, 2011, the Judge agreed with Mr. Patituce and dismissed the criminal charges filed in Rocky River Municipal Court. 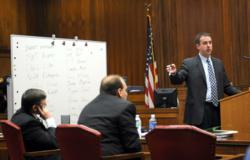 The Constitution provides that no citizen shall be punished for an unconstitutional law. It is important to hire a defense lawyer that is well versed in the law you are being charged with.

In the case of Bay Village vs. John Still, Case Number 10 CRB 1584, in Rocky River Municipal Court before Judge Hagan. The defendant was charged with one count of criminal child enticement in violation of Ohio Revised Code Section 2905.05(A). The defendant hired criminal lawyer Joseph Patituce of Patituce & Associates, a defense lawyer practicing near Cleveland to defend him.

The defendant was accused of criminal child enticement, however, Mr. Patituce was able to successfully argue that the Court should throw out all charges against his client.

On April 21, 2011, Mr. Patituce the defendant's defense lawyer filed a motion to dismiss all charges based on prior case law holding that the law the defendant was charged under had been previously found unconstitutional. The Prosecutor argued in his brief that the Court of Appeals clearly had reached the wrong decision, however, the Rocky River Judge was not convinced by the Prosecutor's argument.

Mr. Patituce said, "It is important that every citizen be protected from laws that are overly broad, vague, and unconstitutional. While my client denies the allegations raised against him, there was never a single piece of evidence that showed he made any physical attempt to entice the young child. Moreover, there is no evidence he made any attempt at all to physically restrain her."

Mr. Patituce also said, "This is a complete vindication for my client, the system worked and an unconstitutional charge was thrown out."