A new exhibit opening at The Corning Museum of Glass November 18, 2010, explores the cultural exchanges of glass techniques and styles between East Asia and Western Europe in the 18th and 19th centuries. 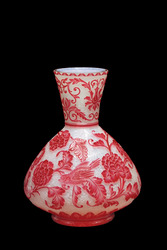 Until now, scholars have tended to focus primarily on the influence of Eastern decorative styles on Western markets and objects

When East met West in the courts and trade centers of the 13th century, a fruitful international exchange was born and lasted through several centuries. A new exhibition at The Corning Museum of Glass will explore the resulting cross-cultural influences in technology, scientific experimentation, and decoration among glassmakers in Europe, China, and Japan in the 18th and 19th centuries.

Through a range of Museum objects from the early modern period, East Meets West: Cross-Cultural Influences in Glassmaking in the 18th and 19th Centuries will document the European adoption of traditional Asian styles and iconography, and examine the largely overlooked impact of Westerners—missionaries, alchemists, and craftsmen—on the development of new glassmaking techniques and formulas in the East.

The extension of the Silk Road to Italy in the age of Marco Polo (1254-1324) brought Eastern goods to Europe, where such exotica was treasured. Influential tastemakers such as Grand Duke Ferdinando I de' Medici and Elector Christian I of Saxony became enthusiastic collectors of Chinese porcelain, sparking a demand that spread beyond the courts. This growing fascination with porcelain goods inspired imitation, and scientists throughout Europe attempted to replicate the material.

These early experiments were closely linked to glassmaking, based on a longstanding misconception that porcelain was a vitreous, not clay-based, substance. The alchemical knowledge needed to create glass imitating porcelain was transferred from glassmaker to glassmaker across the Continent. Their efforts resulted in the production of a variety of opaque white “milk glass” objects, which found a market alongside imported (and, eventually, European-made) porcelain, satisfying the fashion for enameled chinoiserie-style objects.

The new milk glass recipes were subsequently brought to Asia by European Christian missionaries, along with other glassmaking formulas and skills that revolutionized the industry in China. One such missionary and scientist, Kilian Stumpf, organized a glassworks in Beijing in the 1680s, extending the influence and innovations of European alchemists to East Asia.

“Until now, scholars have tended to focus primarily on the influence of Eastern decorative styles on Western markets and objects,” said curator of European glass Florian Knothe. “With this exhibition, we will showcase an incredible cultural and technological exchange that is, in fact, much more textured and fluid, with channels of influence running in both directions. The role of Western craftsmen and scientists—such as Stumpf—in facilitating advancements in Eastern glass manufacturing cannot be overlooked.”

Drawing on the long tradition of porcelain making, glassmakers in China blew and enameled opaque white glass for foreign and local markets. The Museum’s scientific analysis by X-ray fluorescence of a few of these objects in its collection has revealed that the composition of some of the white glass used in the East is closely related to the milk glass made by German craftsmen. In East Meets West, Knothe suggests that a connection to the community around Stumpf may be the reason for such results.

Although the Chinese absorbed Western glassmaking formulas and technology, they did not borrow European forms or decorative techniques. Instead, they carried over approaches from indigenous crafts such as porcelain making and hardstone carving and further enriched their stylistic repertoire by using European glassblowing and cutting methods. The exhibition showcases this dual influence with several examples of cameo glass vessels, in which the Western technique of overlaying opaque glasses of different colors is combined with local carving techniques and iconographic style.

In addition to their taste for chinoiserie, Europeans welcomed Japanese designs, which introduced a new range of shapes, forms, and motifs to the West. In parallel, Japanese glasshouses adopted Western practices into their production during the second half of the 19th century. Glasses from the Satsuma Clan Factory, which reflected the decorative influences of Dutch and English cut crystal, became very fashionable table wares. An exquisite set of geometrically cut Sakazuki decanters and cups will be displayed in the exhibition.

Technological exchange and stylistic influences continued into the 20th century, with continued global influences in glass design and the emergence of an international scene of glass artists who skillfully employed traditional techniques and newly interpreted historic craft traditions.

The Corning Museum of Glass
The Corning Museum of Glass is home to the world’s most comprehensive collection of glass. Spanning the globe and encompassing more than 3,500 years of human ingenuity, the collection includes masterpieces from ancient Egypt, Greece and Rome; the great civilizations of Islam, Asia, Europe and the Americas; and the range of artistic movements beginning in the late 19th century and extending to the present day. Interactive exhibits tell the story of life-changing historic advancements and contemporary innovations in glass technology.

Live glassblowing demonstrations (offered at the Museum, on the road in the U.S. and abroad, and at sea on Celebrity Cruises) bring the material to life for audiences of all ages. Daily Make Your Own Glass experiences at the Museum enable visitors to create their own work in a state-of-the-art hot glassmaking studio.
The Museum’s campus includes a year-round glassmaking school, The Studio, and the Rakow Research Library, the world’s foremost archive and reference collection on the history of glassmaking. A center for scholarship, the Museum also publishes glass-focused periodicals, books and exhibition catalogs.

Located in the heart of the Finger Lakes Wine Country of New York State, the Museum is open daily, year-round. Kids and teens, 19 and under, receive free admission. The Corning Museum of Glass is conveniently located directly off I-86/Rte. 17, mid-way between Niagara Falls and New York City.