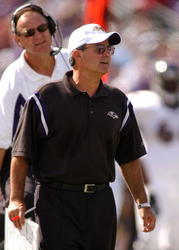 Coach Zauner has probably taught me more in the last 2 days than I've learned from any other coach in 2 or 3 years.

"Over the years, numerous Special Teams Coaches have told me they would like to acquire the skills necessary to develop their kicking specialists and kicking strategy to their top level," says Zauner. "But many," he adds, "have said it is frustrating to find someone who actually has the skills to help them become better coaches."

According to Zauner, the depth of the skills, fundamentals and strategies presented in the 'Coaching the Coaches' Clinics will assist coaches in training their kicking specialists and enhance how they implement their kicking game.

You can view videos introducing these clinics at: http://www.coachzauner.com/coaching/index.html

Zauner should know what it takes to make a good coach. He spent 13 years in the NFL with the Vikings, Ravens and Cardinals as a Special Teams Coordinator working with Head Coach Dennis Green and Head Coach Brian Billick.

Early in his career, Zauner had the honor of being the 1st full time Special Teams Coach in NCAA history, having been hired by Doug Scovil at San Diego State in 1980. During his 11 years as a college Special Teams Coach, he worked for two of the all time great coaches, LaVell Edwards and George Allen.

Later, as a kicking consultant, he was been hired by some of the all time great NFL Coaches including Dick Vermeil, Mike Ditka, Marty Schottenheimer, Dan Reeves, Tom Flores and George Seifert.

Zauner says he wants to bring his years of experience and knowledge to other kicking coaches who are still active in the game. Coaches like Head Coach Jim Tressel of Ohio State and Head Coach Kyle Whittingham of the University of Utah, who in the Spring of 2008 sent their coaches in charge of their kicking specialists to Fountain Hills, Arizona for Zauner's One on One Coaching Clinic.

Zauner says 'Coaching a Coach' is a win-win situation for both the coach and the kicking specialists. A fact often overlooked by the coaches, but according to Zauner, not by the kicker.

As a Kicking Consultant working in Arizona, Zauner is currently consulting some of the top NFL, college and high school kicking talent around the country.

In fact, Jon Ryan of the Seattle Seahawks recently said in a testimonial for Zauner, "Coach Zauner has probably taught me more in the last 2 days than I've learned from any other coach in 2 or 3 years."

For media information and articles about Coach Zauner, please go to:
http://www.coachzauner.com/media_center/index.html