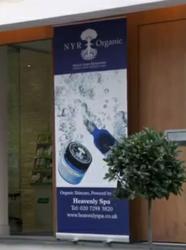 The company hopes that along with this new more people will be willing to get colonic treatments and colonoscopy procedures to detect colon cancer early, so the best chance for a cure is possible.

Marlin Armstrong is the owner of Heavenly Spa and is specifically trained in colonic irrigation. The ethos behind Heavenly Spa is that health and beauty starts from within. Marlin says, “A spa is not a luxury, it is a necessary retreat. We all need a place to restore, rebalance and unwind. It’s about total wellbeing - from the inside out.”

For that reason, Heavenly Spa offers a range of alternative health and beauty treatments to help their clients fully cleanse and nourish their bodies. Their treatment list includes an extensive variety of massages, Dazzle, Glimmer and Glow body care packages, a number of facials, anti-aging treatments, slimming programmes and of course colonic irrigation.

With some articles claiming that colonic irrigation has little or no health benefits, Marlin wanted to explain more about the treatment’s process and the benefits of having a colonic treatment. As a colonic irrigation specialist with many years experience to go on, Marlin decided to release a YouTube video to counteract these views from the setting of her own spa.

“Colonic irrigation can help with many bowel conditions, such as constipation and irritable bowel sydrome” says Marlin. “To treat these conditions we recommend a regular series of treatments. It is a very useful step to include in a detox programme as well, as colonic irrigation aids the elimination of toxins. At Heavenly Spa we offer a service where we develop a detox programme with our clients.”

In his highly publicised biography, it was revealed that Simon Cowell regularly undergoes colonic irrigation treatments as a way to battle the inevitable signs of aging. He joins a long public list of celebrities opting for this treatment not just for health purposes, but also as a step in their beauty regime. Marlin can support the beauty benefits of colonic irrigation, and regards alleviating acne and generally improving the skin’s condition as one of the treatments many outcomes.

Not only that, Marlin says that her clients often report feeling elated after their colonic irrigation. “Our clients usually feel lighter, cleaner and refreshed. A feeling of elation is common so we recommend a little caution.” She says.

The majority of the videos currently available on colonic irrigation are amateurish or homemade videos of people having their colonic treatment, something that Heavenly Spa were keen to avoid in the content of their own video. “We wanted to emphasise the professionalism and care with which we treat all of our clients. We also show the relaxed and welcoming atmosphere we offer at our spa, something that all colonic irrigation spa’s should offer.” says Marlin.

Heavenly Spa’s website, http://www.HeavenlySpa.co.uk, has a great Frequently Asked Questions area where many of the common queries and apprehensions are addressed. As Marlin explains in their YouTube video, “One of the most common questions we get is whether it will hurt, but if you just relax and enjoy it, it’s a really easy process. Really easy.”
To watch Heavenly Spa’s colonic irrigation video, go to http://www.youtube.com/watch?v=t-U9xGepDJ8. To find out more about Heavenly Spa and the treatments they offer, go to their website at http://www.HeavenlySpa.co.uk.