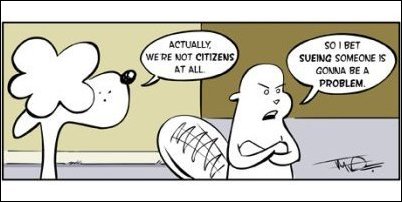 He's doing his best to fit in as a house pet and disguises himself whenever his owners are around. It's not the most convincing disguise, but he's working on it.

A new weekly online comic strip has been launched today by Seattle cartoonist Ian Ross. The first episode of "kitten and poodle" can be seen at http://www.kittenandpoodle.com. The comic strip centers around a grumpy show dog named "poodle" and a character named "kitten", who is actually not of the feline persuasion, but a beaver in disguise.

"Kitten has decided to live in poodle's house after being forced to abandon the forest due to rampant over-development," says creator Ian Ross. "He's doing his best to fit in as a house pet and disguises himself whenever his owners are around. It's not the most convincing disguise, but he's working on it."

In the early comic strips, viewers can see kitten settling in nicely to the pampered lifestyle of a house pet, watching TV. Poodle plays the straight man and often the wry interpreter.

Ross' anthropomorphized characters are the perfect vehicle for his observations on life, which are offered up with gentle, good humor.

In one early strip, kitten muses, "A beaver can alter its environment more than any animal on earth. That means that I could do anything. I could cure diseases, end world hunger... Greatness is in my DNA!"

To which poodle responds, "Was that your DNA that made you dam up the bathtub with Slim Jims?"

Ross will be updating his comic strip weekly, and plans to one day collect the comics into book form. "If the strip takes off, kitten and poodle could be busy with a cartoon series or a feature length movie," says Ross. " Kitten likes to think big...I wouldn't be surprised to see him on the talk show circuit."

About Ian Ross
In real life, Ian Ross spent the last two years at The Hartman Group, working as the market research firm's in-house cartoonist. He is currently working as a designer for the web animation and design company, Plexipixel. Ian has owned a hamster, three cats, a dog, a goldfish, and a cockatiel. To the best of his knowledge he has never owned a poodle or willingly shared his home with endangered woodland creatures. Ian lives and works out of Seattle, Washington.