President Bill Clinton was among the honorees, and also addressed an audience of nearly 200 Mount Sinai graduates as commencement speaker. 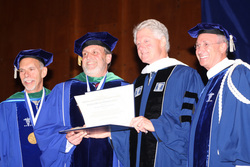 One of the great challenges of the age is to reduce the disparity between wealthy and poor countries.

Mount Sinai School of Medicine at its 41st commencement ceremony today honored a former president, legendary scientists in the field of genetics and human genome research, and renowned humanists whose work has advanced biomedical research and provided much needed access to health care both locally and internationally. President Bill Clinton was among the honorees, and also addressed an audience of nearly 200 Mount Sinai graduates as commencement speaker.

Held at Avery Fisher Hall at Lincoln Center, the event reflected Mount Sinai School of Medicine’s commitment to being a world leader in genetics research, and in providing patient care reaching across international borders. The graduating class embodies Mount Sinai’s dedication to translational science, medical advocacy, and the mentoring spirit that has transformed medical education. A total of 198 degrees were granted, including 116 MDs, 33 PhDs, 18 MPHs, and 31 MS degrees.

In his address, President Clinton cited the mapping of the human genome as crucial moment in medical history, and challenged the Class of 2010 remain committed to public health.

“One of the great challenges of the age is to reduce the disparity between wealthy and poor countries. Bridging that gap will help determine the future of the world we all live in. Never before have we been in a position to do such good. See yourselves in whatever health field you choose as agents of positive change,” President Clinton said.

President Clinton was honored for his contributions to the developing world and the underserved communities in the United States, including those served by Mount Sinai. Through the William J. Clinton Foundation, President Clinton focuses on health issues that demand urgent action, solutions, and measurable results, ranging from HIV/AIDS in the developing world to childhood obesity in the United States. After the earthquake in Haiti, President Clinton established the Clinton Bush Haiti Fund (CBHF) with President George W. Bush to respond to unmet needs in that country.

Dennis S. Charney, MD, Dean of Mount Sinai School of Medicine and Executive Vice President for Academic Affairs of The Mount Sinai Medical Center, described how because of rapid advances in the field of human genetics the graduates were likely to participate in the most profound biomedical revolution in history.

“The opportunity for innovation in biomedicine has never been greater,” he said. “There is strong evidence that investments in biomedical research can improve the health of the nation, can bend the health care cost curve, and revitalize the economy.

“Physicians will diagnose disease and provide personalized treatment based upon genetic data. By knowing the genes that cause human disease, prevention of illness will become a reality. The classification of human disease based upon genetic profile will accelerate the discovery of safer, more effective therapies,” said Dr. Charney.

Dr. Charney credited President Clinton with laying the foundation for this future by investing, as president, in the research that would ultimately map the human genome.

Peter W. May, Chairman of the Mount Sinai Boards of Trustees, encouraged the graduates to always remember to put the patient first. “During your time here, you were trained and mentored by internationally-acclaimed physicians and scientists who taught you how to put the patient first. As you now go out into the world, you have the chance to take what you have learned and make a tremendous impact,” he said.

Kenneth L. Davis, MD, President and Chief Executive Officer of The Mount Sinai Medical Center, challenged graduates to always strive for answers as problems in health care continue to grow across the country. “In the next few years, The Mount Sinai Medical Center, and in the near future each of you, will be faced with challenges that will test your values, and the oath you will take today. Leave here with the same values that attracted you to Mount Sinai, which Mount Sinai practices every day, and that will hopefully guide you in the turbulent times that lie ahead,” he said.

Doctor of Humane Letter degrees were given to four pillars in the local and international communities for providing access to quality care:

Doctor of Science honorary degrees were given to two pioneers in the biomedical sciences:

About The Mount Sinai Medical Center

The Mount Sinai Medical Center encompasses both The Mount Sinai Hospital and Mount Sinai School of Medicine. Established in 1968, Mount Sinai School of Medicine is one of few medical schools embedded in a hospital in the United States. It has more than 3,400 faculty in 32 departments and 15 institutes, and ranks among the top 20 medical schools both in National Institute of Health funding and by U.S. News & World Report. The school received the 2009 Spencer Foreman Award for Outstanding Community Service from the Association of American Medical Colleges.

The Mount Sinai Hospital, founded in 1852, is a 1,171-bed tertiary- and quaternary-care teaching facility and one of the nation’s oldest, largest and most-respected voluntary hospitals. In 2009, U.S. News & World Report ranked The Mount Sinai Hospital among the nation’s top 20 hospitals based on reputation, patient safety, and other patient-care factors. Nearly 60,000 people were treated at Mount Sinai as inpatients last year, and approximately 530,000 outpatient visits took place.