The Wimbledon winner opens a new window allowing fans direct access to one of the world’s greatest female tennis players. 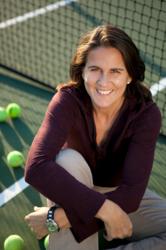 Watching the games again, recompiling and rescuing pictures that I didn’t even know existed was so touching! I knew I wanted to share that with all of my fans.

Conchita Martinez, Spanish tennis legend and three time Olympic medal winner delves into the cyber world with her new website http://www.conchitamartinez.com. The Wimbledon winner opens a new window allowing her fans the oppportunity to connect with one of the world’s greatest female tennis players.

Through her website, fans will have direct access to all of Conchita's latest endeavors including coaching, sports commenting and upcoming appearances. She is also introducing her wine and tennis tours in and around Barcelona. Whether a novice to the game or a seasoned veteran, Conchita will turn fans into pros, both on the tennis court and in the vineyard. The site also connnects fans to her official social media pages; Facebook, Twitter and You Tube.

“The development of the site was an exciting task. Watching the games again and recompiling pictures that I didn’t even know existed was so touching! I knew I wanted to share that with all of my fans,” says Conchita Martinez

The site, which was designed and developed by Taylor & Pond, a full service digital agency based in Southern California, is available in both English and Spanish. “We were excited to lend our digital expertise to our long time friend and tennis legend, Conchita Martinez. We wanted to create an online destination for Conchita to share her exciting new ventures with fans, the media and fellow tennis lovers.” says Siri Fomsgaard, VP of Taylor & Pond

Visit the site to stay up to date on everything from her latest blog posts, to never seen before photo galleries, as well as a compliation of restored videos.

About Conchita Martinez
Conchita Martinez is a former professional tennis player born in the town of Monzon, Aragon, Spain. She is the only Spanish player to have won the women's singles title at Wimbledon, where she beat Martina Navratilova to win the 1994 Women's Singles. She also was the singles runner-up at the 1998 Australian Open and the 2000 French Open. Martinez is currently director at the Analucia Tennis experience. For any inquiries, interviews, or news reports about Conchita Martinez contact her press office: prensa(at)conchitamartinez(dot)com