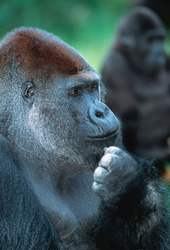 The investments have paid off handsomely and CBFP can serve as a model to be replicated in other major biomes around the world.

Leaders of the Congo Basin countries and conservation groups are pressing for more attention, funds and technical support to save the world's second largest rainforest and benefit its population during a Congo Basin Forest Forum and Congressional Hearing today.

The leaders, including heads of state and ministers for natural resources, also agree that the 46 billion metric tons of carbon stored in the forests should be recognized as a valuable asset during global climate change talks in Copenhagen this December.

The Forum and Congressional Hearing are aimed at celebrating 10 years since the historic Yaounde Summit, which first brought together heads of state from the countries that share the Congo Basin's rich rainforests. Since that time, millions of acres of new protected areas have been created, new initiatives on bushmeat and anti-poaching are in place, and sustainable forestry is beginning to take root.

A brief overview of accomplishments include:

"Since 2002, the Congo Basin Forest Partnership has been instrumental to the creation of protected areas and national park networks, and in prioritizing natural resource management in the region. In fact, throughout the Congo Basin we have seen 'conservation' become a household word." said Michael Fay, Conservationist and Senior Explorer for the Wildlife Conservation Society. "The investments have paid off handsomely and CBFP can serve as a model to be replicated in other major biomes around the world."

While they are celebrating success, participants in the Forum are aware of the vast challenges facing the Congo Basin.

"The conservation successes of the past 10 years are impressive, but they are tempered by the ongoing challenges of the bushmeat crisis, illegal logging and mining, and climate change," said Dr. Richard Carroll, Vice President of World Wildlife Fund's Africa and Madagascar Programs.

Climate change discussions at the Forum highlight the urgent need to assess the impacts of climate change on the Congo Basin, begin devising adaptive strategies to cope with those impacts and recognize the importance of reducing emissions from deforestation and forest degradation.

The Congo Basin is an enormous carbon storehouse, sequestering an estimated 46 billion metric tons of carbon--more than any other forest except the Amazon. However, since its rates of deforestation are relatively low, the countries of the region fear they may be excluded from climate agreements decided in Copenhagen this December that address deforestation and degradation.

"The colossal quantities of carbon captured and stored in the forests of the Congo basin are massively significant in global efforts to tackle climate change. The Congo Basin Forest Partnership has shown that forest management can bring increased stability and prosperity to the people of the region," said Dr Frank Hawkins, head of Conservation International 's Africa Program. "We must ensure that the Copenhagen climate talks in December provide financial incentives for these nations to keep their forests standing or we will all suffer the consequences."