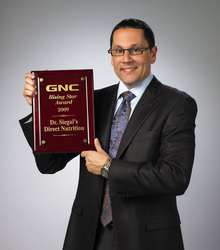 In the short time in which our products have been available at GNC stores we've seen sales grow quickly. We started in 600 GNC stores and are now in more than 1,300, and we expect to see continued growth in 2010.

"We're flattered to have received this truly unexpected honor from GNC," said Matthew Siegal, president and CEO of DSDN, who was on hand to accept the award on his company's behalf. "In the short time in which our products have been available at GNC stores we've seen sales grow quickly. We started in 600 GNC stores and are now in more than 1,300, and we expect to see continued growth in 2010."

Dr. Sanford Siegal developed the concept of a diet based on a hunger-controlling food in the early 1970s while writing a book about substances in food that are particularly satisfying of hunger. Based on his research, he engineered a secret protein formula to curb hunger and enable his patients to stick to the low-calorie diet that he advocates. After several years of experimenting in his family's kitchen, Dr. Siegal produced a particular mixture of amino acids that resulted from the combination of certain food substances. He baked his formula into a cookie and gave it to a few patients. Dr. Siegal's COOKIE DIET® was an overnight success. By the mid-1980s, his Miami-based medical practice had grown to include 14 clinics and he was supplying his cookies and shakes to hundreds of other physicians. To this day, Dr. Siegal personally mixes every batch of his proprietary protein blend with his own hands in his private Miami bakery.

Shortly after creating his cookie, Dr. Siegal created Dr. Siegal's COOKIE DIET® brand shake mixes which, when added to water and ice in a blender, produce a cool, hunger-controlling beverage. All flavors of Dr. Siegal's cookies and shakes are available at GNC.com.

In 2007, Dr. Siegal and his son, Matthew Siegal, the company's CEO, began offering their cookies, shake mixes, and other products directly to consumers through http://www.CookieDiet.com (which has more than 120,000 members) and retailers, including GNC, Walgreens, and Samsclub.com.

Although knockoff products have appeared, Dr. Siegal's COOKIE DIET® is recognized as the original, and the brand continues to command a nearly 100 percent share of voice in the press.

Dr. Siegal has been profiled by Good Morning America, The View, The New York Times, Forbes, The Wall Street Journal. Entertainment Tonight, and hundreds of other media. Recent stories include: