For Mouth-Watering and Easy Results, Roast the Thanksgiving Turkey on a Built-in Home Rotisserie

The indirect heat of a La Cornue Flamberge built-in rotisserie makes it simple to prepare moist and succulent Thanksgiving turkey right in a home kitchen. No basting, brining or complicated prep required. Pre-heating is the secret to success of the holiday turkey, chef says. 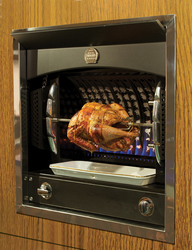 Roasting the Thanksgiving turkey is easy and foolproof with the new built-in Flamberge rotisserie from La Cornue.

"With the Flamberge rotisserie, the turkey stays moist because it self-bastes. And rotisserie cooking is very forgiving," says Larissa Taboryski, culinary director, Purcell Murray. "The turkey cooks indirectly so it browns but does not dry out."

With the new built-in home rotisserie, roasting the Thanksgiving turkey is now a lot less stressful. No more dried out turkey if guests are late or the sides take longer than expected. Besides producing exceptionally moist and succulent turkey, cooking on the built-in La Cornue Flamberge rotisserie has the advantage of being very simple and practically foolproof.

The most important step is to be sure the bird goes into a hot rotisserie, one that has been preheated for 10 to 12 minutes.

That’s according to Larissa Taboryski, culinary director for Purcell Murray, exclusive North American distributors of the built-in La Cornue Flamberge rotisserie. She regularly conducts classes in the showroom here and instructs cooks on a variety of techniques.

She likes cooking on the Flamberge rotisserie because it’s easy and accessible, no matter what the user’s level of expertise. “And the roast turkey is like nothing you’ve ever had before,” she notes.

The gas La Cornue Flamberge, which measures only 32 inches square by 15 inches deep, is the first and only UL approved rotisserie that can be built into a home kitchen.

Why does the rotisserie deliver such mouth-watering results? Food scientists have recently discovered that initial exposure to high heat bursts open flavor molecules in food, making it taste delicious. “That is what the rotisserie does,” Taboryski notes, “but it must be very hot, otherwise the turkey will be a bit flabby.”

The Flamberge is pre-heated for about 10 to 12 minutes. “It’s always better to put food into a hot environment,” the chef recommends. Then the spit is loaded and the turkey roasted for about 15 minutes.

“It takes that long for flavor molecules to open up,” Taboryski says. “The sizzle becomes more powerful.” Then the temperature can be reduced to medium to roast the turkey evenly. Total cooking time for a 12-lb. turkey is about an hour and a half. And no basting required. And no roasting pan to scrub.

“Brining is great for added flavor, but we lose so little moisture with this style of cooking it's not necessary,” Taboryski advises. “To add flavor, give the turkey a dry rub of seasoning mixed with kosher salt the day before so the flavors penetrate into the flesh. The same way they make BBQ in the South.”

While the bird is not stuffed, Taboryski suggests putting garlic cloves, cut up Meyer lemons or even orange segments into the cavity.

The bird remains moist because it self-bastes. And it does not char, although it browns, because with the Flamberge, the gas flame never touches the food. Instead synthetic wicks pull the flame up and keep the concave cast iron back of the rotisserie very hot. So everything cooks indirectly via radiant heat.

The Flamberge rotisserie can be very forgiving. “If guests are late, you can slow it down, by another half or three quarters of an hour without food drying out because of the self basting,” Taboryski points out. Either the heat can be turned down, or the adjustable spit can be pulled forward.

It’s easy to watch the cooking. But at the same time, once the turkey is on, you don’t have to monitor or worry about it, the chef says. So the cook can concentrate on preparing the sides and enjoying the company of guests.

Clean up is fast. The food does not spatter, and the porcelain dish underneath collects any rendered juices. The spit, clamps and dish all go into the dishwasher.

The La Cornue Flamberge, handcrafted in France, is available in 27 standard colors and can be accented in a choice of nine trim options. Custom colors are available as well.

About La Cornue
La Cornue, the French artisan producer of exceptional hand-made custom kitchen ranges, was founded in 1908 by Albert Dupuy, a discerning gourmet who was inspired by new technology. With the aim of designing and constructing the most reliable range available, he invented the first gas oven built for the home. Many of Albert’s principles of cooking are still used in La Cornue ranges today, and the company is now run by his grandson Xavier Dupuy. La Cornue produces Château custom hand-made ranges, the Flamberge rotisserie, and French-style CorneFé ranges.