Stay-at-home mom Johnnie Gabriel of Marietta, Ga. lost everything but her home in 1990. It was there that she began baking cakes to keep her family afloat and get her kids through school. Next month, from her four-time Best of Atlanta award-winning restaurant, she'll launch her first book -- Cooking in the South -- and prepare to appear on national television. 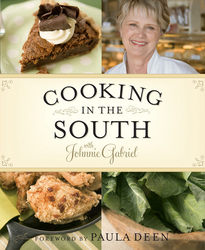 She took the heat, stayed in the kitchen and now, 18 years later, Johnnie Gabriel is enjoying the sweet taste of success.

In the midst of tough times and an economic downturn nationally in 1990, Gabriel and her husband Ed lost everything but their home. It was there that they began baking cakes and catering to keep the family afloat and get her children through school.

Who: Johnnie Gabriel, Owner of Gabriel's Desserts in Marietta, GA

What: Release of First Book, Cooking in the South (Thomas Nelson Publishers, September 2008)

Johnnie Gabriel is available for interviews.
For interviews or excerpt permissions,
Jason Jones at 615-902-2344
jjones @ thomasnelson.com