The medicinal fungus Cordyceps Sinensis (Hirsutella Sinensis) was found to suppress interleukin-1b and interleukin-18 secretion by inhibiting both canonical and non-canonical inflammasomes in a study published in Scientific Journal and available via Tonicology LLC. 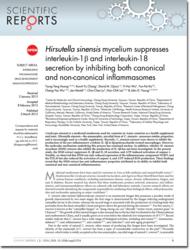 Cordyceps Sinensis (Hirsutella Sinensis) extract has anti-inflammatory properties attributed to its ability to inhibit both
canonical and non-canonical inflammasomes.

Cordyceps sinensis is a medicinal fungus used for centuries in Asian countries as a health supplement and tonic. Traditionally prescribed by medical practitioners as a kidney and lung supplement, studies have found Cordyceps Sinensis’ impact on the human body reaches other functions as well, such as energy, fertility and anti-inflammation.*

*Legal Disclaimer: These statements have not been evaluated by the Food and Drug Administration. This product is not intended to diagnose, treat, cure, or prevent any disease.