Billy Kirsch will be discussing the benefits of his creative and enjoyable team building exercise at the PCMA Orlando Convening Leaders on January 16th. 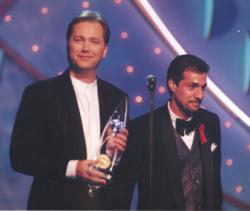 PCMA Convening Leaders is a fantastic place to meet, network and learn - with cutting edge presentations and sharing by thought leaders.

Billy Kirsch will be discussing the benefits of his creative and enjoyable team building exercise at the PCMA Orlando Convening Leaders on January 16th.

Grammy & Emmy nominated hit songwriter Billy Kirsch will be presenting his program, “Harnessing Your Creative Power” at PCMA Convening Leaders in Orlando on January 16, 2013. The Professional Convention Management Association (PCMA) meeting attracts well over 3,000 conference designers, educators, networking gurus, and other motivated and successful entrepreneurs from around the globe. The meeting is touted as one of the event industry's most comprehensive educational and networking events.

Billy Kirsch and the Kidbilly Music team leads participants all over the United States through a step-by-step team building exercise that enables them to tap into their creative potential, identify their corporate or personal vision, and harness this to increase performance and results. During this interactive session, everyone will create a shared story through music and song. Billy will be in good company at PCMA Convening Leaders with Thomas Friedman and David Novak being featured speakers.

“I'm excited to be in the company of great speakers like Thomas Friedman as well as leaders in the event industry,” said Billy Kirsch, President of Kidbilly Music.
“PCMA Convening Leaders is a fantastic place to meet, network and learn - with cutting edge presentations and sharing by thought leaders. Although I've written hit songs for lots of famous people, I truly look forward to these freewheeling, interactive sessions that bring business people out-of-the-box and on into a new kind of comfort zone.”

With clients such as Microsoft, The Walt Disney Company, PricewaterhouseCoopers, and Vanderbilt University, Kidbilly Music has helped many people rediscover their creativity with team building activities to become more innovative and engaged in their work.

Grammy and Emmy nominated, CMA & ACM award winning songwriter Billy Kirsch has harnessed the power of creativity to lead a successful life as an entertainer, songwriter and entrepreneur. Billy’s song, “Holes In The floor Of Heaven” recorded by Steve Wariner, won a Country Music Association song of the year award, was nominated for a Grammy award and was a number one hit.