Sunwarrior celebrates as Croix Sather blows away a 13 year-old world record in a demanding race that only 2 others have ever completed. 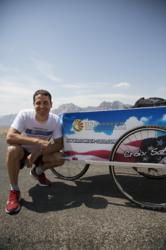 Sunwarrior, a leading health and fitness company making vegan protein powder and supplements, was proud to partner with Croix Sather as he took on Death Valley and Mt. Whitney with a monumental trek from the lowest point in the continental United States to the highest. This “Solo Self-contained Crossing” Ultramarathon took Croix across 146 treacherous and blistering miles in 3 days with 25,000 feet of ups and downs along the way. There were no aid stations or water stops; Croix had to push his own food, water, and supplies, weighing over 250 pounds, as he raced toward the world record.

This record was set in 1999 by racing legend Marshal Ulrich when he completed the Badwater SSC in 77 hours and 46 minutes, pulling and pushing his rickshaw-like cart the distance. Ulrich is one of previously only two people to ever complete the challenge out of the five who had attempted to do so. Lisa Bliss is the first woman and only other finisher, completing the run in 89 hours and 39 minutes. Croix Sather has now joined them in the record books as the third to complete the challenge and has taken the time record from Ulrich, shaving 4 hours and 51 minutes off the previous record. Croix finished with a final time of 72 hours and 55 minutes on August 26.

“We are so proud of Croix and were happy to have worked with him on this challenge,” said Denley Fowlke, cofounder of Sunwarrior. “We were cheering him on and supporting him in spirit, even though he had to do this entirely on his own. He came back from his first attempt, rallied, and then tackled the run without looking back. Croix is the perfect representative for our brand and it was exciting to see him pushing a cart with our name on it for so many miles. What he’s done is beyond amazing and he deserves the honor and recognition that will come with this accomplishment.”

On August 19, 2012 Croix Sather challenged the 13 year-old record in temperatures that can only be called scorching. Croix is a relative newcomer to the ultra-running scene who could only be called a casual runner less than three years ago. Inspired by the ultra-distance runner Stu Mittleman, Croix, at 40, strapped on his running shoes and took on the 2,621 miles between California and New York. It took him 100 days, running the equivalent of a marathon each day, as he inspired thousands of people with his determination and endurance. Now he’s completed something shorter, but far more challenging.

“Success was the only option from the beginning,” said Sather. “This wasn’t about breaking a record. It was about never giving up. It’s about living life full-out and living up to my potential. Dream so BIG it inspires you, Act so BIG it inspires the World!”

Croix has motivated the nation to do more and reach beyond expectation with his Run Across America at 40 years old. The first five chapters of his inspirational book – Dream Big, Act Big – are available for free on his website. Croix Sather reprograms the subconscious mind for success. As a motivational speaker, Success Hypnotherapist, author, and radio show host, he is transforming lives from ordinary to inspirational, motivating thousands to get up and learn how to run a marathon, ultramarathon, 5k, or even just run around the block as they change themselves for the better.

Croix’s experience includes four Ironman triathlons, skydiving, shark diving, fire-walking, and fire-eating. Croix's adventures, thrilling stories, and demonstrations will keep you on the edge of your seat as you learn the psychology of success. “Win your inner game and you win at life.”

Sunwarrior’s mission is to illuminate body, mind, and planet. This company was born from the nutritional dreams of three men who wanted to create a plant-based protein powder that would be raw, healthy, and benefit mankind along with the planet mankind occupies.

Sunwarrior has grown since that night 4 years ago at the Sedona Raw Food Festival, offering several raw, vegan products that are perfect for anyone and any lifestyle: protein to build and recover, activated barley for enhanced endurance, supergreens for trace minerals, and liquid minerals complexes with iron, fulvic acid, and magnesium that nourish cellular function and boost the immune system.

All energy comes initially from the sun and is captured by the miraculous plants around us. Join us in our mission to share this energy with everyone. Together we truly can transform the planet, one warrior at a time.