Win up to £20K to start or grow your business: CrowdBnk is running the #GreatIdeas crowdfunding competition in February 2013 to celebrate its launch. 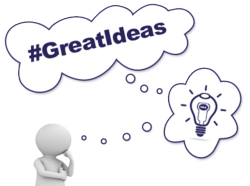 It’s not new for people to put their hands in their pockets for something they believe in.

Win up to £20K to start or grow your business: CrowdBnk is running the #GreatIdeas crowdfunding competition in February 2013 to celebrate its launch.

Crowdfunding offers an alternative source of funding for these businesses. This week sees the dispatch of the eagerly awaited crowdfunded product - the Pebble Watch, which ships worldwide. The startup Pebble Technology raised over $10 million in the US, through Kickstarter, to manufacture their smart watch - proving that people will get behind ideas that capture their imagination.

CrowdBnk is running the #GreatIdeas competition for people with ideas to test their entrepreneurial skills through crowdfunding. It is a UK wide competition open to anyone with an idea whatever stage they are at, across all sectors. Success will be judged by the crowd as people back ideas they are excited about here: http://www.crowdbnk.com/projects/competition

Starting on the 31st Jan and running until the 1st of March, it is free to enter and at the end of the competition the winners get cash prizes to help get their ideas off the ground. The idea that raises pledges worth £10K the quickest will win £7K additional funding from CrowdBnk. The idea that is shared the most by its supporters through social media wins an additional £3K. The funds will be awarded to the entrepreneurs at an event held in March 2013.

CrowdBnk, http://www.crowdbnk.com, is a crowdfunding platform that works with ideas across the whole spectrum from charity, through social enterprise to business, including those businesses raising capital in return for equity.

For CEO Ayan Mitra, CrowdBnk is the realization of a personal dream: “I started CrowdBnk to prove a point: that there’s another way to get ideas off the ground. It’s not new for people to put their hands in their pockets for something they believe in. All we’re doing is changing the scale. We’re making it possible for more people to get involved and we’re making it easier for entrepreneurs and supporters to find each other in a safe and trusted environment.”

Notes to Editors
CrowdBnk is a crowdfunding platform that allows entrepreneurs to raise money from their supporters in return for rewards or equity.

CrowdBnk is the first crowdfunding site operating with appropriate permissions to market equity investments to retail investors – that is anyone in the UK who is over 18.

It is free for entrepreneurs to pitch their ideas and investors when they invest. CrowdBnk takes its 9% fee only when the funds are raised. If the entrepreneur does not raise their target then CrowdBnk does not charge anything.

CrowdBnk Limited is a private company limited by shares, registered in England and Wales under company number 07706111, and our registered office is at TechHub @ Campus, 4-5 Bonhill Street, London, EC2A 4BX. CrowdBnk (No. 586771) is an appointed representative of BriceAmery Capital, which is authorized and regulated by the Financial Services Authority (No. 489602) with its registered address at 6th Floor Albemarle House, 1 Albemarle Street, London W1S 4HA.