Recent research has produced photographs of mind projected thoughts in water. Continuing research has great promise for astounding scientific substantiation of the interconnectedness of all things on Earth. 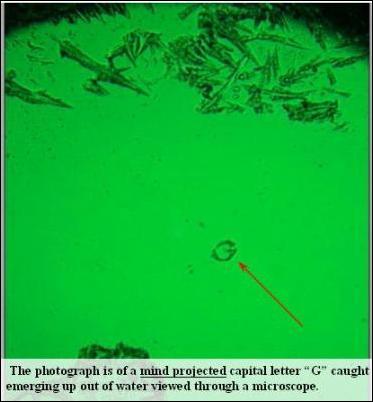 . We now have completed over one hundred of these remarkable

In a nutrient rich water, like that of the body, the thought of a capital letter "G" was deliberately mind projected, a thought held in mind and directed with intention, into water by a student of Qi Gong (pronounced chee gong) and photographed. The research took place at the Mind Science Laboratory of the Shun Shen Tao Temple in Florida.

The photograph was taken of a capital letter "G" having emerged up out of the water after the letter "G" had been mind projected into the water. The picture was taken through a microscope.

Senior Researcher D. P. Meyers stated "We started this phase of our research work back in October of 2006. Our first letter to be photographed was the capital letter "G". We now have completed over one hundred of these remarkable "mind projected thought into water" experiments, and consistently the letters emerge up out of the water. Completing the first phase of our research, we are now moving into the second phase and our results appear very promising."

"This means too that the nutrient rich water, like that of the body, becomes an extremely receptive psycho-responsive (responds to thought) medium, provided that the body has available the nutrients it needs.

Grand Master David Harris, a Qi Gong Master stated "From ancient Chinese medical text we are told that; the body forms a crystalline matrix of nutrients within the waters of the body. Our research findings strongly suggest that what may be happening in human bodies with regards to thinking, is the mind also writes and encodes information directly into the body via a crystalline matrix interface of nutrients produced by the human body. The upshot of this research is clear "as we think a thought, so we embody that thought."

Decades of modern proclamation i.e. The industrialist Andrew Carnegie's commissioned works by Napoleon Hill entitled Think and Grow Rich, Norman Vincent Peale's Power of Positive Thinking, Dale Carnegie's How to Stop Worrying and Start Living, Tony Robbins book Awaken the Giant Within and the movies like "What The Bleep" and "The Secret" has preceded these first to be released findings from the Mind Science Laboratory of the Shun Shen Tao Temple.

Decades of conjecture and theory as to whether a thought has an affect on a material substance, or even on the body can now begin to be put to rest.

The photograph presented (above) blatantly and graphically underscores the answer as, "yes it does."

The supportive research work of Dr. Bruce H. Lipton in his book The Biology of Belief has shown that the body's cells are responding to the body's internal environment and the external environment of the world with an amazing acute sense of perception. Dr. Masaru Emoto's research work with frozen water crystals, documented in his book The Hidden Messages in Water, demonstrates the distinct affect of a positive or negative thought upon the symmetry of water crystal formations. A positive thought produces symmetrical patterns; a negative thought produces chaotic patterns.

The research work from the Mind Science Laboratory of the Shun Shen Tao Temple strongly suggests that the nutrient rich waters of the body within its tissues and cells can respond in a specific and verbatim manner to thought. The human body resounds with thought.

Mind Projected Letter "G"The photograph is of a mind projected capital letter "G" caught emerging up out of water viewed through a microscope.