Olubunmi Akindebe (Lara Daniels), a Nigerian Immigrant to the United States, has penned her first African suspense-romance book, titled 'Love in Paradise'. Love in paradise sets to showcase the African culture as one that is sensuously romantic and will be enjoyed by readers of diverse cultures everywhere. 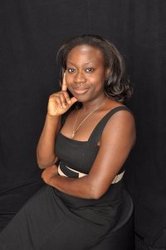 Olubunmi Akindebe, a Nigerian Immigrant to the United States, writing under the pseudonym Lara Daniels, has penned her first African romance-suspense novel, titled 'Love in Paradise'- A most sensational book that is grabbing positive reviews from readers of different cultures. With this novel, Ms. Akindebe joins the elite group of recent Nigerians who have become famous for their literary works, such as Uwem Akpan, a Jesuit priest whose book titled, 'Say you are one of them' was recently picked by Oprah for her book club selection.

'Love in paradise' showcases Africans as romantic. It is a fictional tale with characters coming from African countries, which are often plagued with greed and corruption of the governing authorities.

The major characters in this novel are two disparate people who have built walls to keep out an unkind world and its disappointments. They meet unexpectedly and briefly with electrifying results. They go their separate ways with presumably little chance to reconnect, dancing a lonely pas de duex, circling each other like moths around a flame, while unbeknownst to either, two opposing forces square off: one praying to unite the pair, one seeking to destroy them. The characters' reawakening faith sets an effective counterpoint to the world of real and apparent deceit that they find themselves caught up in.

Maggie Beasley, an Indianapolis based Romance Novel Critic writes: "Lara Daniels offers the reader both intrigue and romance in her tightly crafted Love in Paradise. Although set in far off Africa, the theme of alone-ness will strike a chord in readers of diverse cultures. We all suffer these pangs of isolation and uncertainty as we search for meaning and connectedness in our lives."

For a short time only, copies of Love in Paradise are available exclusively at http://www.laradaniels.com.

About Olubunmi Akindebe
Ms. Akindebe, a dual citizen of Nigeria and the United states was born in September 14, 1977 in Lagos, Nigeria. She has been writing since the age of ten. A seasoned veteran reader of Romance novels, Ms. Akindebe grew up feeding off on novels published by Harlequin, Silhouette and Mills & Boons Romance. Her writing career started in High school where she wrote short fictional stories. Writing for Ms. Akindebe provided a world of escape from the harsh realities that were all too common in the tough African society of Nigeria. Ms. Akindebe continued her love for writing in College, from where she relocated to the United States.

Love in Paradise is self-published through Art-Book Bindery and is the first published work by the Author within the United States. Ms. Akindebe is currently working on a sequel to Love in Paradise, titled "Love at Dawn" under the same pen name of Lara Daniels. Love at Dawn is due for release in the summer of 2010. Ms. Akindebe currently lives in the Dallas/Fort-worth metroplex in Texas with her family.