23 Former Addicts from Harvest Farm and The Crossing Complete Goal: Families Congratulate Their Sons and Brothers at Finish Line 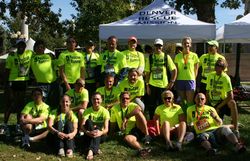 Being on the team and training has helped me gain a sense of accomplishment. When I want to get over the pain I’ve caused my family, I can run and start to put it behind me.

Twenty-three men from the New Life Rehabilitation Program at the Denver Rescue Mission (DRM), participated in the Rock-n-Roll Denver Marathon and Half-Marathon as part of the Denver Rescue Mission Marathon Team. Since 1892, DRM (http://www.DenverRescueMission.org) has been meeting the needs of homeless and low-income men, women, and children through emergency services, rehabilitation, transitional and permanent housing, and community outreach.

The DRM Marathon Team began in 2007 when father and son DRM New Life Program participants Nick and Shane Sterner, led a group of 15 men through training for their first race at the Post-News Colorado Colfax Marathon. After graduating the program, Nick Sterner started Activity Inspired Rehabilitation (http://www.theairfoundation.org), an organization confronting homelessness and addiction through distance running. Sterner has been running with former addicts from DRM programs since graduating and trained his largest DRM team of 23 runners who participated in the 2010 Rock-n-Roll Marathon on Sunday, October 17, 2010. Team members are in the program and living at The Crossing, DRM’s transitional living facility in Denver, and Harvest Farm, DRM’s rural, rehabilitation 200-acre farm in Wellington, Colorado.

Racing in day-glow yellow DRM shirts on Sunday, the team ran through Denver’s great parks: Civic Center Park, Washington Park, Cheesman Park, and City Park. Team members range in age from 20 to over 60, and their stories are as diverse as their ages.

Matt Schroeder is a first year team member, 35 years old and in Phase 2 of the DRM New Life Program. He has been addicted to heroin since age 17. Matt has overdosed and lost three friends to heroin. Because of his addiction, he lost a music scholarship where he planned to be a piano teacher and has been to prison on drug charges two times. Facing another prison sentence, Matt explained to his judge that he had entered the New Life Program at DRM and just joined the marathon team. The judge, a marathon runner, gave Matt a suspended sentence. He has taken this opportunity to change his life and work towards productive, self-sufficiency.

Matt chose to be on the running team because he learned that less than 10% of 1% of the world’s population had completed a marathon. He had always been part of a negative statistic – people who overdose on heroin. “Being on the team and training has helped me gain a sense of accomplishment,” says Matt. “When I want to get over the pain I’ve caused my family, I can run and start to put it behind me.” Matt has given his parents the medals received at races leading up to the marathon. “Now my Dad tells his friends I’m running, not jogging,” says Matt. “Running has been a form of reconciliation for me and my family. I’m excited they were at the finish line on Sunday!”

Another first year team member is Mario Marshall, a 28 year old Phase 2 New Life Program participant who was in his last year of graduate school studying psycho therapy at the University of Denver before entering the program. Mario had a history of withdrawing from friends, family and society when things around him were not working. After a destructive relationship and breakup left him severely depressed, Mario began drinking heavily. He did not return to school after a holiday break, lost his scholarship which then led to him losing his home. Mario stayed on a friend’s couch. The friend was Tuesday Buskey, chef at The Crossing. She encouraged him to enter the New Life Program. Mario could not believe he entered, thinking he was not like the other addicts. “Now I believe I am more like the other program participants than I could have ever thought,” says Mario. “I am glad I joined.”

Mario joined the DRM Marathon Team with another program participant Jason Sharrett. He wanted to know how far he could push himself and see if he could physically train and run a marathon. His mother came to see him at the finish line on Sunday as well as his older sister, who Mario had not seen in two and half years. She came to Denver from Vancouver. “The biggest positive I’ve seen in the running program is when I hit the wall running 24 miles,” says Mario. “My team members pulled me through and told me not to give up!” He was also inspired by Gordon, who is 58 years old and on the team. “He is the oldest member and comes out on the runs and walks all the miles to complete his training.”

Each DRM Marathon Team Member is fighting daily to change his life, to turn away from addiction and realize positive life change through spiritual development, case management, Christian counseling, education, and work therapy through the New Life Rehabilitation Program. Through this multi-phase program, the men discover that a major life change is not easy, but with small steps, loving support and guidance, it is possible.

The DRM Marathon Team trained since June 2010. Each week they ran with volunteers, participated in Yoga and Physical Therapy classes, and have been supported by Runner’s Roost Colorado, Runner’s Roost Fort Collins, Catalyst Therapies, Solepepper Sports, Rocky Mountain Road Runners, Fort Collins Running Club, Ancient Arts Healing, Running Guru, Endurance Sports Marketing Group, and Fusion Running. To prepare for Sunday’s race, the Denver Rescue Mission Marathon Team had a celebration, carbohydrate-loading Pasta Dinner sponsored by Interstate Kitchen & Bar and Gaetano’s at the Riverfront Lofts. “We are dedicated to helping maintain and progress the local communities in and around Denver. The Denver Rescue Mission is just one place we like to lend a helping hand,” says Joseph Newman, owner of Interstate Kitchen & Bar.

Give Your Sole, held a shoe drive at the Rock-n-Roll Denver Marathon. Race participants donated their used running shoes right after the race. Runners took off their shoes that carried them through the race right off their feet and received a free pair of flip flops to wear home. All 425 pairs of shoes collected were donated to the Denver Rescue Mission.

Brett Byrd, founder of Give Your Sole, has seen first-hand the difference a simple pair of shoes can make to one of the 3.5 million people who will experience homelessness in the U.S. this year. “The impact of giving a person a pair of shoes is immediate,” he says. “It gives them a sense of mobility that allows them to get to where they need to be; whether it is looking for work or going to the grocery store to feed their family. We are extremely blessed and grateful to have the relationship with the Rock ‘n’ Roll Series that we do. With their continued partnership we are able to reach those in need through such great organizations as the Denver Rescue Mission allowing us to give back locally in hopes of making a difference.” In addition, 20 bags of clothing, 235 cases of water and 52 boxes of food were also donated by the Rock-n-Roll Denver Marathon.

Matt Schroeder crossing mile 26 on his way to completing the full marathon.