Last month, Johnson & Johnson's DePuy subsidiary initiated another recall of a metal-on-metal hip replacement system. This latest product was the Adept, which was sold outside the United States. 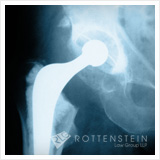 Those who believe their DePuy hip implant has injured them or caused them to suffer should know they are not alone.

Last month Johnson & Johnson initiated another DePuy recall, this time centered on its Adept line of metal-on-metal hip replacement components, according to a Feb. 14 Reuters report.* This is the second such device Johnson & Johnson has withdrawn from the market, the other being the DePuy ASR, which it recalled in August 2010. The Rottenstein Law Group notes with concern that while the device was not sold in the United States, the ASR was sold here and the evidence against the safety of metal-on-metal hip replacements in general is mounting.

Johnson & Johnson sold about 7,500 Adept components in 21 countries outside of the United States between 2004 and 2011, according to Reuters, and data showed an increasingly common device failure rate.

Rochelle Rottenstein, principal of the Rottenstein Law Group, which is currently accepting metal-on-metal hip replacement cases, said the Adept recall shows parallels to the ASR recall, especially given the testimony during the current ASR trial in Los Angeles In re: Loren Kransky and Sheryl Kransky v. DePuy, Inc., et al. (BC456086, Los Angeles Superior Court) that indicated alleged faults in the design of the ASR hip implant.

“These recalls are good news for future hip implant recipients, but they raise a lot of questions for those who have already undergone the procedure,” Rottenstein said. “Those who believe their DePuy hip implant has injured them or caused them to suffer should know they are not alone.”

The Rottenstein Law Group, a personal injury firm, encourages hip implant recipients to download an informational brochure from its website to learn more about the DePuy ASR recall and lawsuits and to help them evaluate if they have a case.

There are currently more than 10,000 lawsuits pending against Johnson and Johnson because of the ASR, in state and federal courts (MDL-2197). DePuy said at the time of the recall that the ASR hip replacement system has a 12 percent failure rate, but an Australian device registry found that failure rate to be closer to 40 percent, according to Bloomberg.** Kransky, 65, is suing DePuy, alleging that he has suffered metal poisoning (AKA “metallosis”) and pain because of the poorly designed ASR hip implant he received. About 93,000 ASR hip implants were sold worldwide.