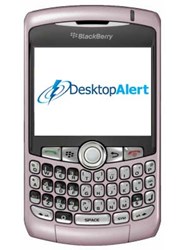 Any authorized operator of the Desktop Alert Mass Notification System (MNS) can contact one, some or thousands of end-users and activate numerous alerting endpoints in a less than one minute with one simple phone call.

“The feature is entirely unique in the mass notification industry. The phone recorded message is sent to the targeted recipients landlines and cellphones, Indoor and Outdoor Public Address and/or Giant Voice speakers as well as workstation 'pop-ups' to be audibly heard by all message recipients,” said Howard Ryan, Chief Research and Development, Desktop Alert Inc.

The phone call activation enables numerous endpoints to be activated including those endpoints such as computers, speaker systems, e-mail, digital signage which reside on premise and behind the customers firewall. The acoustic capability of the system notifies targeted personnel in harm’s way as the enhanced audio capability allows people to hear the emergency message even if they are away from their workstation provided they are within listening range of the computer or public address speakers.

“Any authorized operator of the Desktop Alert Mass Notification System (MNS) can contact one, some or thousands of end-users and activate numerous alerting endpoints in a less than one minute with one simple phone call,” Ryan added.

Desktop Alert provides standard numbers as well as toll free numbers as part of the service. Additionally, the system provides local phone numbers for activation in over 100 countries.

Text To Speech For PC's