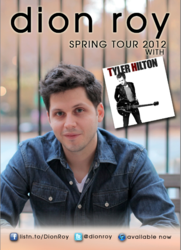 "Dion Roy's songs are great and we got to explore some really exciting sonic places! I’m super proud of what we've created here." Steven Miller (producer)

Singer-songwriter Dion Roy is adding new cities to his U.S. tour with musician Tyler Hilton, who also stars in the hit CW Television Network series “One Tree Hill”. The Spring 2012 tour will now include stops at over a dozen cities, including Raleigh, NC, Cambridge, MC, Athens, GA, Birmingham, AL, and Dion’s hometown of New York City.

During the tour, fans will get an exclusive sneak peak at some of the tracks off Dion Roy’s upcoming full-length album “Into The Day.” With songs that range from upbeat pop/rock anthems to heartfelt acoustic guitar ballads, “Into The Day” will establish Dion Roy as one of the best new singer-songwriters out of New York City. During the Spring tour, Dion will also be introducing his new fan club, “Team Full Hearts,” which will give his fans special VIP access to his latest music and merchandise.

“Into The Day,” which is scheduled for release later this Spring, is Dion Roy’s first collaboration with producer and songwriter David Hodges, whose credits include working with Kelly Clarkson and Evanescence. The Grammy award winning musician co-wrote “Counting the Days,” a moving power ballad featured in the new album. The album will also mark Dion Roy’s second collaboration with music producer Steven Miller who has previously worked with famous artists such as David Cook and Avril Lavigne. "Dion's songs are great and we got to explore some really exciting sonic places! I’m super proud of what we've created here,” exclaims Miller.

The tour will be the second time Dion Roy and Tyler Hilton hit the road together and promises to be their best tour yet, solidifying their place as the most exciting singer-songwriters on the indie music scene today.