Learn what you can do to prevent dog vomiting during the winter season, and discern when it's normal and when veterinary action is required. 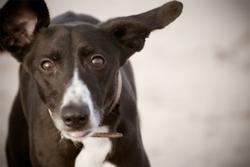 Why is my dog vomiting? This is a fairly common question for dog owners.The list of reasons that a dog will vomit are plentiful, and the list of things a dog can swallow is even longer. The trick of it is knowing when it is time for a trip to the vet and when dog vomiting can be linked to an issue that will pass with a little bit of time. Dog throwing up certainly means that something has gone wrong, but it is not always a cause for emergency measures.

A dog’s penchant for eating mouthfuls of snow and then throwing it up is so common it has a name, winter blap disease. This occurs when a dog exercises and then eats a snowman’s worth of snow. They will come inside, or remain outside, and throw up the contents of their stomach a few minutes later. The summer form of this, called summer blap disease, occurs when a dog drinks copious amounts of water and then vomits.

Water Consumption During the Winter

With the cold comes the added chance of sicknesses like flu and pneumonia. Dogs that are kept outside should have a dry place that is sheltered from the wind, always have access to warm water and be let inside if it gets too cold. Electric bedding is also available to help keep a dog warm during the winter. Puppies will be more vulnerable to cold weather conditions than adult dogs, and should be kept warm and comfortable at all times.

Knowledge of the symptoms these sicknesses can produce will provide a better understanding of whether dog vomiting is caused by sickness or for another reason.

Some dogs have different dietary needs, and this can change from season to season. At times, owners find it helpful to switch diets. Sudden changes in diets can be hard on a dog’s digestive system and result in the dog throwing up. The best way to introduce a new diet is to implement it slowly. Mix the new with the old, increasing the ratio of new dog food as time goes on. This way, the dog will have time to get used to the new diet.

Dog’s have rather incredible digestive systems. When a dog’s stomach tells its brain that there is something going on that it doesn’t like, the dog will vomit continuously until there is nothing left in its stomach at all, maximizing the chance of ridding all irritants in the stomach. This can be alarming, especially if it leaves the dog shaky and exhausted, but it doesn’t necessarily mean that it is time to take them to vet.

Fasting can often clear up many cases of dog vomiting. By drinking only water and no food for 4 -6 hours, the stomach can get a chance to rest, and whatever is causing the vomiting will hopefully pass through the system in 24 hours – be it a rock or a Barbie doll head. If a dog is throwing up, but otherwise fine, there’s not much cause for worry.

If the dog is exhibiting more than one symptom or, after withholding food for 24 hours they are still vomiting, it might be time to get to the vet. Additional signs can include

This is by no means an exhaustive list and should be researched further in order to accurately diagnose health problems.

Dogs aren’t going to stop eating things they shouldn’t eat; thus, will continue to have reasons to vomit whatever it is they have swallowed. Although it is not always necessary to take drastic action when dog vomiting is occurring, knowing the possible reasons will help determine whether or not action is called for.