In observation of the Jewish celebration of Passover, Dogington Post compiled the Definitive Kosher for Passover Dog Food List, with recommendations for Passover-friendly dog foods for Jewish dog owners to feed their four-legged family members. 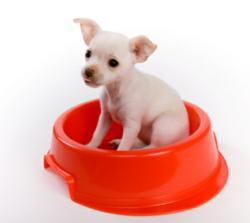 Because dogs are family members, and because Jews cannot be in possession of grains during Passover, we’ve compiled a list of Passover-approved dog foods.

Monday evening begins the observation of Passover, an 8-day Spring celebration of the freedom of the Jewish people from slavery in Egypt. From the evening of March 25 through the evening of April 2, in recognition of the unleavened bread that the Israelites ate when they left Egypt, Jews do not eat – or keep in their possession – any chametz, or grains that can become chametz.

Chametz may not be consumed on Passover, either by eating it, or dissolving it in water and drinking it, and no benefit may be derived from it. It must be either burned or destroyed of in some manner.

“Because dogs are family members, sharing our homes and mealtimes, joining us in celebrations, and because Jews cannot be in possession of these grains during Passover,” said Brandy Arnold, Content Editor for Dogington Post, “we’ve compiled a list of Passover-approved dog foods that are highly recommended for quality, healthfulness, and taste.”

Experts from MyJewishLearning.com explain, “There is at least one halakhic ruling by Rabbi Avraham Danzig, an 18th century rabbinic authority from Vilna, that permits buying regular dog food that doesn’t contain chametz. However, be careful to read the labels and check that what you buy doesn’t contain any wheat, barley, or other grains.”

The popular dog news site, which reaches 2.6 million dog families each week, published their Definitive List on Tuesday, March 19, to reach Jewish readers in time to prepare for Passover.

It is permitted to feed pets kitniyot ― rice, corn, soy beans, etc. ― which some Jews do not eat on Passover. However, Dogington Post does not recommend food for dogs that contains corn, so the site did not include any food with corn on their list of Passover-friendly dog foods.

“There are many dog foods that do not contain grains in them that didn’t make our list,” explained Arnold. “This is the only HEALTHY Kosher For Passover list. We have eliminated companies with a history of recalls or products that include corn – which although permitted in dog food on Passover – is actually bad for your dogs.”

The Dogington Post’s Definitive 2013 Kosher for Passover Dog Food List has been made available to anyone who visits the website.