Granbury, Texas, Mother of one Helps Feed Hundreds of Babies as a Breastmilk Donor to Mothers' Milk Bank of North Texas, Breaks World Record for "Most Breastmilk Donated" 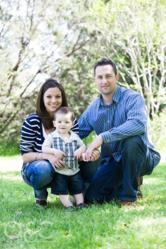 New Guinness World Record holder Alicia Richman of Granbury, Texas, with her husband, Adam, and son. Richman donated over 11,000 ounces of breastmilk to the Mothers' Milk Bank of North Texas.

Richman pursued a Guinness World Record designation to bring awareness to the cause of nonprofit, community milk banks such as the one in North Texas. “I encourage everyone to beat me,” she says, adding “though I’m planning to beat my own record."

Got milk? As a new mother, Alicia Richman of Granbury, Texas, had lots of milk, and she now holds the new Guinness World Record for “Most Breastmilk Donated.” Richman pumped, stored and donated 11,115 ounces of breastmilk to The Mothers’ Milk Bank of North Texas between June 2011 and March 2012. Last month Guinness World Records™ certified that she broke the previous record held by another American woman by more than 3,000 ounces.

The recipient of Richman’s milk, The Mothers’ Milk Bank of North Texas, is a nonprofit human milk bank that provides donor breastmilk to neonatal intensive care units to feed premature and critically ill babies. The Milk Bank honored Richman at their annual luncheon in September.

Richman, whose son was born in March 2011, began pumping her milk shortly after he was born. By the time she returned to work when he was 10 weeks old, she realized she had more than enough to feed her son. “I was so blessed to have more milk than I needed,” says Richman, whose son is now 19 months old. “I pumped at work, on vacations, in the car. And I never had to buy formula.”

When she had filled two freezers with pumped milk in plastic bags and bottles, she realized that she needed to put it to use or she would have to throw it away. “I started searching the Internet to find out what I could do with these freezers full of milk, and that’s when I learned about The Mothers’ Milk Bank of North Texas.”

For the first year of her son’s life, Richman regularly donated her stored breastmilk. When she passed the 7,000 ounce mark, Simone Summerlin, who handles donor relations for the Mothers' Milk Bank of North Texas, told her that she was on her way to being one of their largest volume milk donors. Her Guinness World Record donation of 11,115 ounces is equivalent to 86.8 gallons.

“Alicia’s generous gift of human milk has fed hundreds, and more likely, thousands of premature babies across the United States,” explains Amy Vickers, executive director of The Mothers’ Milk Bank of North Texas. “Three ounces of donor human milk could be as much as nine feedings for a premature baby. We know that she’s changed lives all over Texas and beyond, and we are proud to see her earn this recognition from Guinness World Records. ”

Richman decided to pursue a Guinness World Record designation to bring awareness to the cause of nonprofit, community milk banks such as the one in North Texas. “I encourage everyone to beat me,” she says, adding “though I’m planning to beat my own record when we have a second baby.”

The Mothers’ Milk Bank of North Texas accepts donated milk from fully screened, healthy, breastfeeding mothers whose infants are under one year old. The donated milk is processed, tested for bacteria and frozen until ordered by a physician.

“We depend on donors like Alicia to sustain and grow our fragile infants whose mothers cannot provide them with their own milk,” says Erin Hamilton Spence, MD, a Fort Worth neonatologist and former milk donor. “Her ‘extra’ milk saves lives.”

# # #
Notes to Editors/Producers: Alicia is available for phone and on-camera interviews.