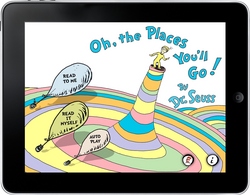 “We are proud to have some of the most well-received children’s eBooks on the App Store,” said Susan Brandt, President of Dr. Seuss Enterprises, “And we are thrilled with how incredible these books look and feel on the Apple iPad.”

Celebrating its 50th anniversary and World Oceans Day on June 8, 2010, One Fish, Two Fish, Red Fish, Blue Fish eBook is now available for $3.99. For the graduate in your life, Dr. Seuss’s Oh, the Places You’ll Go! eBook is also available for $3.99. And for entertainment, try Up With A Fish!, a fun, addictive stacking game available for the low introductory price of $0.99.

One Fish, Two Fish, Red Fish, Blue Fish, a rhyming book for young readers first published in 1960, is now available in interactive format. Dr. Seuss has joined The Ocean Project (http://www.theoceanproject.org) to make a big splash for 2010’s World Ocean Day on June 8th. To celebrate the book’s 50th anniversary these funny fish will help children “from there to here, from here to there” learn how everyday actions impact our ocean home. Through his rhymes and riddles, Dr. Seuss's intention is clear: teach children to read in a way that is both entertaining and educational. Children will be so entranced and amused by this app that they may not even notice they are learning to read!

Oh, the Places You’ll Go! has been adapted for the first time to an interactive book format for the iPhone, iPod Touch and iPad. First published in 1990 (and Theodor Geisel’s last published book before his death), it speaks of life’s trials and triumphs. Full of good wishes and sage advice, this tale chronicles a cheerful little guy in a yellow jumpsuit as he makes his way in the world. He travels through a wide variety of colorful Seussian landscapes, cities, and sticky situations - some exhilarating, some depressing, some a little frightening. But in the end our hero faces up to each challenge, be it a Hang-up, Lurch or Slump. His success in life is "98 and ¾ percent guaranteed!”

Up With A Fish! is a fun stacking game in which players help the Cat in the Hat stack falling objects atop his tower of fish bowls. Tilt the device to catch falling objects, move the Fish up the stack by catching more fish bowls, and see how high you can score. Up With a Fish! is found in the Kids and Family Games categories and is suitable for ages five and up.

“We are excited to release One Fish, Two Fish, Red Fish, Blue Fish eBook, timed to pay tribute to it’s 50th anniversary and World Oceans Day,” said Michel Kripalani, President of Oceanhouse Media. “We continue to be inspired by Dr. Seuss’s works and are honored to have the opportunity to bring such quality, classic children’s tales to the iPhone and iPad.”

Both eBooks combine the beautiful original artwork of the books with innovative features that promote reading in young children, including highlighted picture / word associations, professional narrations and custom background audio. High-resolution artwork for the iPad and standard artwork for the iPhone and iPod Touch are both included in the same app.

“We are proud to have some of the most well-received children’s eBooks on the App Store,” said Susan Brandt, President of Dr. Seuss Enterprises, “And we are thrilled with how incredible these books look and feel on the Apple iPad.”

Oceanhouse Media has now released twelve Dr. Seuss apps since late-November with many more to come in the near future. Dr. Seuss’s ABC, The Cat In The Hat and How The Grinch Stole Christmas! eBooks have all appeared on the App Store’s Top-Paid 100 chart, with Dr. Seuss’s ABC holding the number 4 position for over a week. All three eBooks topped the Books category in the month of March, holding the #1, #2 and #3 spots for over a week. The apps have received excellent reviews and are a runaway commercial success.

For more information on these products and direct links to the App store, please visit http://www.oceanhousemedia.com/drseuss.

About Oceanhouse Media
Oceanhouse Media, Inc. is an iPhone, iPod Touch and iPad app development company founded in early 2009 by Michel Kripalani, former CEO of Presto Studios and Director of Business Development at Autodesk. The team is comprised of developers with decades of experience, primarily from the videogame business, that now share a common purpose to uplift, educate and inspire through technology. Currently, Oceanhouse Media has over 90 apps on the App Store. The company’s corporate mantra is "Creativity with Purpose." http://www.oceanhousemedia.com